Islamic News
By Bola Badmus and Muhammad Sabiu On Aug 12, 2016 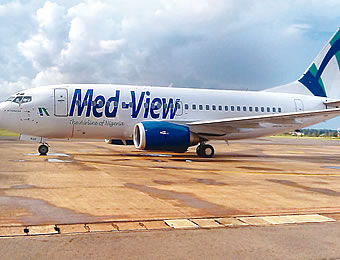 MED-VIEW Airline, on Wednesday, commenced the airlift of 2,500 pilgrims from Kaduna State with the first batch of 320 taking off at the Kaduna International Airport, Kaduna.

The pilgrims were airlifted in the Boeing 777-300 aircraft recently acquired by the airline for Hajj operations. It would be followed by another batch of over 400 pilgrims.

Managing Director and Chief Executive of the airline, Alhaji Muneer Bankole, who spoke to journalists prior to the commencement of airlift, said two flights would be operated daily between August 10 and August 13 to airlift all the pilgrims to Madinah in Saudi Arabia.

He commended Governor Nasir El-Rufai of Kaduna State for the opportunity given to Med-View to airlift over 80 per cent of pilgrims from the state.

“We want to use this opportunity to thank the governor of Kaduna State, Mallam Nasir El-Rufai, for giving us the opportunity to come and serve the people of the state. We are here to airlift 2,500,” he said.

Bankole disclosed that the airline, apart from providing free clothing for the Ihram (a sacred state which a Muslim must enter in order to perform the Hajj pilgrimage) to the pilgrims, they would also be given free Zam Zam water.

He said anybody involved in Hajj operations should ensure comfort and convenience of the pilgrims which, according to him, is what Med-View has done continuously for the 10 years it has been involved in the exercise.

“One thing anybody doing this business should put in mind is to look at the spiritual inclination, that the souls that go for this holy pilgrimage are our mothers and fathers who, as ordained by Allah, are fulfilling their religious obligations,” Bankole added.

Governor el-Rufai had, on Tuesday, in Kaduna, at the farewell ceremony for the first batch of the pilgrims from the state to depart for the holy land, charged them to project themselves as good ambassadors of the state and, indeed, Nigeria throughout their stay in Saudi Arabia.

The governor gave the assurance that problems associated with Hajj operations in the state would soon be over as measures were being taken by his government to improve the administration of the annual pilgrimage to Mecca.

Special Assistant to the Governor on Islamic Affairs, Imam Hussaini Sulaiman Isoho-Ikara, said the state was impressed with the performance of Med-View in Hajj operations so far, recalling that the airline came to the rescue of the state last year.

Med-View Airline is operating this year’s Hajj with three jumbo jets – Boeing 747-400, Boeing 777-200 and Boeing 767-300ER – and airlifting pilgrims from South-West, South-East and South-South, as well as Kaduna State.