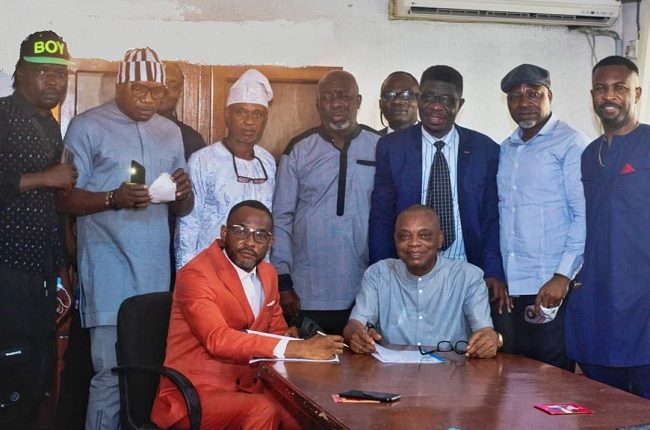 The Performing Musicians Employers Association of Nigeria (PMAN) has entered into partnership with the Musical Copyright Society Nigeria Ltd/Gte (MCSN). They have agreed to work together in a bid to enhance the living standards of Nigerian musicians and other creative people by signing an agreement to ensure that they work hand in hand to achieve set goals for the entertainment industry.

At the agreement signing ceremony which took place at the MCSN’s head office in Lagos, the President of PMAN, Mr Pretty Okafor, said that the union decided to give its full support to MCSN because PMAN and the society have identical goals which border on the welfare and wellbeing of the musicians, adding that it makes sense for the two bodies to work together because the welfare of musicians is paramount to both.

He explained further that with MCSN as the only approved Collective Management Organisation (CMO) in the country today, musicians should give it 100 per cent support to ensure that it succeeds in its functions of collecting and distributing royalties on behalf of musicians without any hindrance.

The Chief Executive Officer of MCSN, Mr Mayo Ayilaran, corroborated the assertion of the PMAN president, adding that the agreement between MCSN and PMAN becomes a milestone which underscores the fact that the musicians’ union has fully thrown its weight behind the society in its function of collecting royalties and creating a clear road-map for the creation of wealth and prosperity for the Nigerian musician and the creative industry at large.

“With this collaborative effort, collections of royalties from users of music will be a lot easier because the musicians who benefit from the royalty collections are now a part of it. And as a Society the only thing we owe the musicians is transparency, which will ultimately lead to prosperity,” he said.

Also speaking, Mr Zeb Ejiro stated that the partnership is a proof that every sector of the creative and entertainment industries needs each other and should henceforth speak with one voice as “what affects one affects all”.

On his part, Mr Sunny Neji, expressed his joy at the development, adding that he feels “so excited that this is happening at last in the music industry and musicians can look forward to start to reap the fruits of their hard labour, without rancor.”

The agreement was signed by Mr Ayilaran on behalf of MCSN and Mr Okafor on behalf of PMAN and those present at the ceremony include; Mr Zeb Ejiro, Pastor Kola Olulana and Mr Victor Okhai, the newly elected President of the Directors’ Guild of Nigeria (DGN), Mr Sunny Neji, Mr Zaaki Azzay, Mr Asha Gangali, Rugged Man, and Aita Bony Itodo.