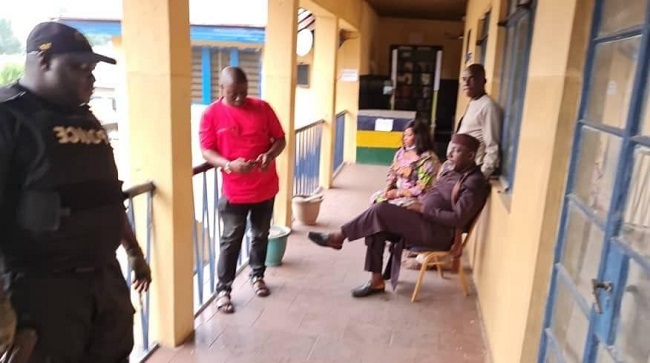 There was mayhem in Imo State on Sunday as former governor of the state, Rochas Okorocha, allegedly led a team of thugs to forcefully reclaim his wife’s Royal Palm Apartment Estate, recently sealed by the state government.

Nigerian Tribune gathered that the estate was on Friday sealed by a government delegation led by Commissioner for Lands, Enyinnaya Onuegbu, who said the government was implementing the report of a Judicial Commission of Enquiry on land use which recommended recovery of the estate and possible demolition, having been built on government land which is also a ‘Green Verge.’

However, the altercation that ensued when Okorocha’s team met face to face with the government team later resulted in the arrest of the former governor and some of his former appointees who accompanied him to the estate.

Journalists who were at the scene of the incident report that Okorocha and his men attempted to escape when they got a hint of the plan to arrest them, but were pursued by security men who shot sporadically into the air and later captured them.

A man who was said to be the Aide De Camp (ADC) of Okorocha when he was governor was arrested after Okorocha and other allies had been conveyed in a police van to the state police headquarters. He was seen holding a cloth over his head, apparently preventing blood from his bleeding head.

Two in-laws of Okorocha, Dr Uzo Anwuka and Ugwumba Uche Nwosu, who also accompanied him on the operation, were still being searched for at the point of filing this report.

The thugs who reportedly came with Okorocha were alleged to have shot at a government team comprising of police, army and thugs, resulting in the exchange of fire between them.

They were said to have run away when they noticed a superior firing power and the overwhelming number of the government team.

There was an unconfirmed report of the death of two and serious injuries to five others.

Reacting to the development, the spokesman of Imo State Police Command, SP Ikeokwu Orlando, said the command received a distress call of violent unrest at Royal Spring Estate and mobilized men who went to bring the situation under control.

He said on investigation it was discovered that the violence was caused by an attempt by Senator Okorocha to forcefully reclaim the estate sealed by the state government.

The PPRO said the command invited Okorocha for questioning on the reason he broke into an estate sealed by the state government, adding that the Commissioner of Police has ordered a full investigation into the matter and if found culpable, the command will not hesitate to arraign the former governor in court for prosecution.

Meanwhile, all attempts by newsmen to get the reaction of media aid to Okorocha proved abortive as calls put to his GSM line were neither answered nor replied.

‘Murderers’ have defected to APC, members should not allow them occupy leadership positions, says Aregbesola