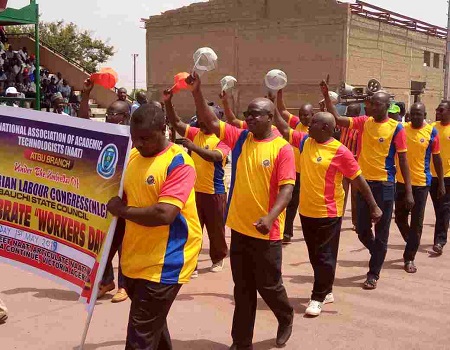 AS he prepares to hand over power to a new administration come May 29th and determined to give workers in the state a parting gift, Bauchi State Governor, Mohammed Abdullahi Abubakar, has expressed the determination of the state government to set up a committee to make recommendations that will help it pays the new N30,000 minimum wage to civil servants in the state.

The Governor stated this in his speech while addressing workers during the 2019 May Workers’ Celebration which took place at the Abubakar Tafawa Balewa Stadium, Bauchi where he was represented by the Head of Civil Service in the State, Adamu Umaru Gokaru, charging the civil servants to be more diligent in the discharge of their duties for the growth and development of the state.

He said: “This administration will soon constitute a committee that will make recommendations on the new minimum wage. Pursuant to the foregoing, I wish to remind our fellow workers that the civil service remains the only veritable machinery through which government programmes and projects are implemented”.

The Governor stated that, “In addition, for the government to fulfil its obligations in service delivery to the good people of Bauchi State, the civil servants must remain effective, committed and productive” just as he charged them to always make the interest of the state topmost priority above anything to avoid going back to the era of impunity.

The Governor, however, called on all workers in the state to rededicate themselves to the eradication of corruption, sycophancy and other vices bedevilling the civil servants.

“Let me remind all workers of Bauchi State that we have never relented in extending the desired change agenda to the grassroots and specifically to the civil service as evident in the number of motivational efforts to the workers through our programmes and interventions,” he stated.

Earlier, in his welcome address, the Chairman, Nigeria Labour Congress, Bauchi State Council, Comrade. Danjuma Saleh Kirfi said that the struggle for the new National Minimum wage has finally been put to rest with the signing of the bill into law by President Muhammadu Buhari.

Sale Kirfi commended the state government for the commencement of the payment of outstanding gratuity to retirees in the state and urged the government to sustain it so that a significant number of pensioners will benefit.

“The payment has significantly brought relief to the homes and lives of many of our senior citizens in the state. With the commencement of the payment of gratuity. I appeal to the Government to extend a similar gesture to the workers through the payment of leave grant transport so as to ease the lives of our colleagues in the service which has been suspended since 2015,” he appealed.

He further appealed to the State Government to consider workers in the state to be part of beneficiaries of farming tools, equipment and inputs procured by the government to boost Agriculture.

The NLC Chairman congratulated the Governor-elect, Senator Bala Mohammed and his Deputy, Sen. Bala Tela, on their victory at the polls, and pledged the unflinching support and loyalty of all workers to his incoming administration to uplift the state to greater heights and urged the Governor-elect to carry the organized labour in his administration.

The NLC Chairman who was elected barely two weeks ago pledged that he will not betray the trust given to him by the workers by electing him in the recent delegate Congress adding that the general welfare of all workers will be his primary priority.