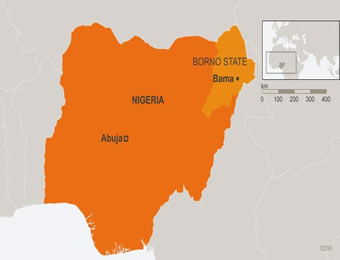 Emotions were stretched to high limits when the chairman Marte local government area of Borno state Alhaji Shettima Marte virtually shed tears while begging the Army to liberate his council area from the hands of Boko Haram in a parley with the theatre command.

He said that for almost five years, his people have not set foot on their ancestral home because the insurgent Boko Haram has taken over the place rendering them useless in internally displaced camps.

He burst into tears on Thursday afternoon during the inter-agency meeting called by the theatre commander Maj General Olusegun Adeniyi to find a solution to the lingering insurgency in the state.

He hinted during the opening session that the Governor, Professor Babagana Zulum had directed all of them in the council areas to assist the military with intelligence to prosecute the war to the end.

The chairman assured that they are about recruiting five hundred vigilantes each to assist the military in protecting their council areas from the insurgents who have consistently tormented residents in the region.

Speaking earlier, theatre Commander major General Olusegun Adeniyi assured that the state is in good hands adding that the terrorist are just ranting but they cannot go beyond the level they are now.

Adeniyi stressed that he is not happy with the supply of illegal logistics including fuel to the insurgents in one way or another making them grow in strength than loose strength.

The theatre commander told the Assembly of council chairmen that “We have been seeing their logistics and capturing them. We would continue to capture them any day we see them in the theatre.

“I don’t believe in the rumours that northern Borno will soon be history. I wish to dissociate myself from that narrative because such rumors are mere wishes that can never come to pass.

” Let me assure you that security agencies are working round the clock to ensure that all the strategies of the Boko Haram will come to nothing in this theatre.

“To the terrorist, I say drop your weapons and do not follow your commanders to their destruction. Allow them to die alone. You don’t need to die as a terrorist in the forest along with them.

He maintained that the insurgents were common criminals who will never achieve any political leadership in any part of the state or the country.

General Adeniyi warned sympathizers that their investments would soon be burnt as long as they continue to help the Boko Haram insurgents.

“We are here to meet with key stakeholders in the state to chat a way of moving the state forward.”

Commissioner of police Aliyu Ndatsu said he was happy to have been sharing intelligence with the military adding that they will commence serious Intel exchange with council chairmen whom he expects to share same with his command.

To stake holders in the theatre, the commander assured that he will continue to maintain a strong synergy with the state government.

Acting GOC of the 7 division Brigadier General Abdulkalifa Ibrahim who spoke in an emotional voice said it was painful to observe that the entire countryside has been destroyed by insurgents in the last ten years.

He assured that he will continue the synergy with the local government to deal with the insurgents.

Brigadier Gen Abdulkalifa said he felt like weeping for the state because the damage caused by this insurgency has left the state far behind its contemporaries in the country.

The acting GOC called on all stakeholders to join hands and end the insurgency in the state.

The abduction which took place between Kamuya and Buratai village home town of the Chief of Army Staff, Lt. Gen. Tukur Buratai.

The Nigerian Tribune recalls that the Cashier of Hawul Local Government Area of the Borno state was kidnapped along the same route, but was later released after payment of ransom.

In a related development, soldiers have sealed the Maiduguri office of Action Against Hunger, a non-governmental agency working in Borno State.

Sources told newsmen that the well-armed soldiers took over and sealed the property Wednesday night parking two trucks at the entrance to the office after chasing Some workers away Wednesday night with a starn warning to them to stay off the structure.

The staff members who reported for work Thursday morning met armed troops around the building making them flee the arena back home not knowing the cause of the anger expressed by the military.

Attempts to get to the spokesman for the theatre Ayodele Famuyiwa, a group captain, to speak on the matter was not fruitful but the theatre commander Major General Adeniyi who interacted with newsmen in the officers’ mess of the marmalari cantonment also kept sealed lips about this development.