Joke Muyiwa is a veteran actress and a former Head of Department, Performing Arts at the Olabisi Onabanjo University, Ago Iwoye, Ogun State, where she is currently a lecturer. In this interview with FEMI OGUNTAYO, she shares her thoughts on how to start a ministry, which she said God called her to start next year and also why the present day Nollywood stars should not depend on what they get from acting as their only means of livelihood among other issues. Excerpts: 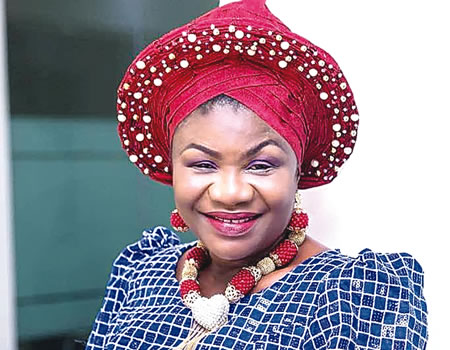 You have been around for a while, can you tell us a little more about yourself?

I am an actress and I am also a lecturer. Many people do not know this. I have a Christian ministry, I am a church worker but by the grace of God, next year, the church of God will spring up which God has commissioned me to build.

How has it been this year so far?

2019 has been so busy, I have done a lot of projects this year and I thank God for health, because if there is no health you cannot really achieve anything, but I thank God that He has really endowed me with good health.  So, I have been so busy this year and I like it that way because it keeps you away from mischief. I’m also a student; I am a M. Phil and PhD student of Theatre Arts. I am already finishing my M.Phil at the University of Ibadan and I have started my PhD at Redeemers University and by the special grace of God, early next year, I will be rounding off my programmes.

Are you looking forward to becoming a professor?

You seem to involve in stage plays too. Tell us some differences in acting on a stage and acting in movies?

Yes, I started on stage and the stage is just like a training ground for anybody who wants to be an actor. If you are an actor and you have never been on stage, then you have not done anything because as an actor, you should be versatile in the two areas. Each of the media has its demand. It has its advantages and disadvantages. I started on stage and even then when I started, I was mixing it up with film, screen theater and all that. In 1980 when I joined the University of Ibadan movie company, I also joined NTA, later I went to a full professional company which was the University of Ibadan Performing Company.

Do you still remember some of your colleagues then?

Yes, Sam Loko is late now; Jumoke Fasola is in England, Clarion Chukwukura is in Lagos and Mama T is also late.

I feel elated and I am happy about it because the king considered me worthy of this title. There are so many people around, but he felt like somebody like me cannot be in his domain and I will not have a chieftaincy title. So,he asked me what type of chieftaincy title do I think fits me, then I said, well, maybe Yeye Asa because I am an ambassador of culture.

So, it was borne out of the fact that you lecture at Ago Iwoye?

And the fact that he sees me in movies. He is so kind and so understanding that despite my busy schedule and I do not really have to be in the palace at all times like other chiefs, which very soon I will still be after I finish all these, but he has been very understanding.

You were also in the news last year when you and your family survived a ghastly motor accident. How would you describe the experience?

It was terrible. It was a very fatal accident, the car was written-off but I thank God, I came out alive. We were four in the car, my son, his fiancé and another guy with me. After the accident, nothing really happened but later I felt so sick that I could not even diagnose the sickness. Later, the calling came that the reason why God is still keeping me is that I should answer the call to carry the cross. Even though the two are at par, I, as an actress and a church worker, do not really gel you know, but then, if God has already destined something, you have to follow the path of destiny.

Are you saying you might be dropping acting for the work of God soon?

I won’t, because even the bible says “Your talents will make way for you”. So, while I am still in church, I will still be acting, and I will have a pointer in my plays that God is the Supreme Being that one should worship. I will not say I am doing a Christian film, no, but it will be godly. I will still take any role as an actress, because as an actress you are like machinery. So I will still take any kind of roles. Even two months ago, I played the role of ‘Iya Olokun’ in a movie, but that does not really make me ‘Iya Olokun’. It is just an act.

As a veteran, what would you say about indecency in present day theatre and film? Some take it to be civilisation; would you also say it is civilization?

It is not right. We are actors, we are fictional characters, we are not real, we just present the world in its image, and we try as much as possible to be real in character. If we are not real, through our act, the audience we are telling the story may not really understand, but that is not to the extent of being nude or showing pornography. There are several ways of showing intimacy without touching each other’s body. For example, in the movies I will still want to produce now, there will be couples who will be lovers there, they may not touch one another and I may just do that with camera angles. You do not need to show too much intimacy in movies. When you do that, you are promoting another thing. You are promoting unnecessary physical and sexual attractiveness that the present generation might not be able to handle. Objectivity is good in movies but how believable are you? I do not do too much make up in my movies and people still tell me I am real, so it is about how real you are.

It’s been a long way coming, what has kept you going which the present day Nollywood stars can learn from?

Number one thing is grace. There, it’s so many people that are better than me but have gone off the radar, but I thank God I am still relevant. Then, its that grace that helps you to be focused and have passion for what you do. I am not doing acting because I want money or fame, I did not start that way. In our days we did not start because of fame or money but now, fame is looking for us, even money is looking for us. What was so important to us then was acting, sometimes they would give you money, and sometimes you get nothing.

We were not interested in the fame even though fame came with it, so if you are acting and fame and money come, it is fine. Now they want fame and money first before anything, but then it was the passion and love we had for the profession that kept us going. Now the love for fame and glamour is what is keeping them but they are not being kept, that is why you see them gone in four to five years because some of them would not be able to endure the heat.

Talking about the heat, what are the challenges in acting which you have experienced and the way out?

By the time I began to lecture, acting was not paying my dues. All my life, I love earning salary through my acting. That was why when I left NTA, I went to University of Ibadan performing company, I was earning 120 Naira. Then I went to Ife to do a certificate course and when I came back, they increased my salary to 300 Naira. So, after some time, when we went to England and came back, the University could not sustain it, so they folded up and I went for a Diploma. At that time if you do a complete six weeks show they will give you 33 Naira. It was not enough, when you think of transportation and feeding, but we kept going.

Do you think, to make it in this profession, one has to necessarily acquire so many certificates and be learned?

In every area of your life, you need to study; there is no end to education. You don’t just go into movies just because you have the talent alone but you know, education is not limited to the four walls of the university. When you observe people, you can even give yourself personal training. Look at somebody like Ibrahim Chatta, he did not really go to school but he has really trained himself. There is no actor in the history of movie industry that he cannot speak about, that is personal education. I started in the university and I am still in the university.

What area do you want the present day Nollywood to improve on?

They should improve on research because when they bring about history, sometimes they do not make enough research into that history and by the time they give it to us, it is not what actually happened. Look at ‘Efunsetan Aniwura’, even Akinwunmi Isola said it that, he did not make enough research because what they claimed happened to her was not what not actually what happened to her.

In the movie, we saw Efunsetan as a very wicked persona and all that. So the story now came later that she was bereaved, same as Afonja. So, present day Nollywood needs to research, especially on historical movies.

What is your worst or most shocking moment in life?

It was the day I lost my second child, who died at the age of one and some months in the hospital. I watched him and he was not responding to treatment. I could not believe it. I had wanted to have another child, to at least erase that memory, but it never happened, so I accepted my fate.

Naira Marley has delivered on his promise of N1m to me —Actor, Jude Chukwuka

Entertainers have side businesses; we are not broke —Actor, Enyinna Nwigwe