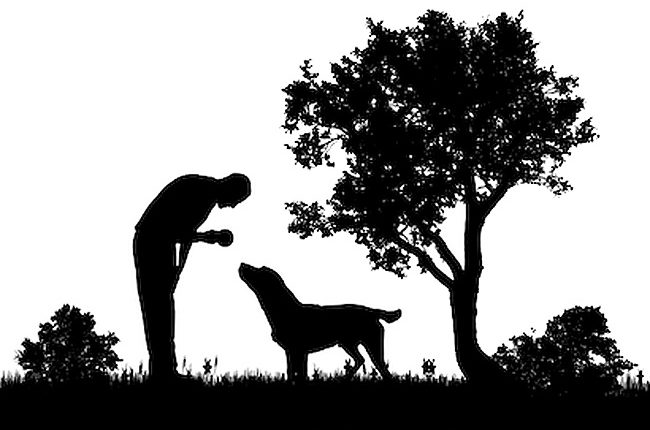 Ordinary Muslims can’t be blamed because they have become used to understanding the world as well as Islam through the lens of the accumulated positions and interpretations of fallible human beings over so many centuries. That’s why they have become accustomed to the notion that dogs represent evil, impurity, or even bad omen. What does the Qur’an have to say about dogs? That’s the focus of this brief write-up.

In two Suras (chapters), the Qur’an mentions about dogs. Those who have an entrenched anti-dog attitude and perception, they would usually flag the following verse from Surah al-A’raf.

“And if We had willed, we could have elevated him (ghawin, deviants) thereby, but he adhered [instead] to the earth and followed his own desire. So his example is like that of the dog: if you chase him, he pants, or if you leave him, he [still] pants. That is the example of the people who denied Our signs. So relate the stories that perhaps they will give thought.” (7/al-A’raf/176)

In understanding and interpreting this verse, we need to remember that dogs are not like human beings with conscience and ability/freedom to choose. A dog’s behaviour is purely innate and instinctive, as Allah has created them. Here the Qur’an has drawn attention to the unchangeable nature of dog, a nature that is innately programmed by Allah. It is the same nature due to which a dog embraces a human being as a companion, friend or master. Unless the behaviour of the human changes, the conduct of the dog is reliably consistent, which is reflected in its loyalty. There is so much evidence of this in the real world, that there is simply no room to deny this reality about dog’s basic nature in its close interaction with human beings.

It is in this context that Qur’an discusses about dogs in Surah al-Kahf (The Cave). In two verses – 18:18 and 18:22 – the mentions occur. Approaching these verses without the relevant context before these verses would render the reference to dog as simply inconsequential. First, let’s cite these two verses.

“And you would think them awake, while they were asleep. And We turned them to the right and to the left, while their dog stretched his forelegs at the entrance. If you had looked at them, you would have turned from them in flight and been filled by them with terror.” (18/Al-Kahf/18)

The context of these verses comes up a few verses earlier. A group of young men, seven to be specific, embraced Allah in their life and sought the guidance and protection of Allah in an environment of repudiation and persecution.

“[Mention] when the youths retreated to the cave and said, “Our Lord, grant us from Yourself mercy and prepare for us from our affair right guidance.” (18/al-Kahf/10)

“It is We who relate to you, [O Muhammad], their story in truth. Indeed, they were youths who believed in their Lord, and We increased them in guidance.” (18/al-Kahf/13)

“And We made firm their hearts when they stood up and said, “Our Lord is the Lord of the heavens and the earth. Never will we invoke besides Him any deity. We would have certainly spoken, then, an excessive transgression.” (18/al-Kahf/14)

God not only accepted their supplication (dua), but also He arranged to make this group of youthful individuals a memorable illustration in history. He also clarified that what He did with these young men were reflection of His mercy (rahmah), as it has been affirmed by these youth in their conversation.

“[The youths said to one another], “And when you have withdrawn from them and that which they worship other than Allah, retreat to the cave. Your Lord will spread out for you of His mercy and will prepare for you from your affair facility.” (18/al-Kahf/16)

Through this story of the companions of the cave (ashab al-Kahf), God not only made these young people an illustrious lesson for humanity, but also a dog is included as an integral part of this story. For those young people who wholeheartedly submitted to God and whose prayers He answered (accepted), a question arises as to why there was a dog in their company if dog is evil, impure, and a bad omen. When showing His rahmah to these young people, why did He include such an animal which is seen by many as representing evil, and not another animal?

Empirically, human experience indisputably records that as a companion, a friend or a loyal subject who reliably and consistently serves his companion, friend or master and does not retreat or hesitate to even give his life, is a dog. Dogs have deservingly earned the reputation as man’s best friend. For thinking and conscientious people, there is valuable food for thought in this Qur’anic narrative.

Yes, there are many Muslims who are not only anti-dog, but often the same people are also misogynists. It is no wonder they also see women as a source of evil (fitna) and bad omen. According to their mentality, if a donkey, a dog, or a woman passes in front of a praying man, then that prayer is broken/annulled and to be repeated. The person who protested against and corrected such wrongful ideas was none other than one of the wives of the Prophet Muhammad (peace be upon him) and mothers of the believers (umm al-mu’minoon) Aisha (r). (Sahih al-Bukhari, Kitab as-Salat, #161).

Across the globe and throughout history, there is ample, undeniable evidence that in the animal kingdom, man’s best friend is a dog. In the story of Surah al-Kahf, the dog was a companion of those young men of the cave whose prayers were accepted by God and as part of His rahmah (mercy), God included the dog in this illustrious narrative, which spread its legs at the entrance of the cave, creating a diversion for his seven young human companions. Subhan Allah.

For those Muslims who invoke the name of dog in abusing, repudiating, or condemning another person might remember and reflect on this Qur’anic narrative that includes a dog.

Reactions on this subject should be sent to yinkadejavu@yahoo.com

Controversial Catholic priest and Spiritual Director of Adoration Ministry, Enugu, Nigeria, (AMEN), Rev Fr Ejike Mbaka, has taken a swipe at President Muhammadu Buhari and past leaders of the country demanding that the President should apologize to the country, especially the youth, on behalf of himself and his predecessors, for causing Nigerians so much pain…Man’s best animal friend  Man’s best animal friend