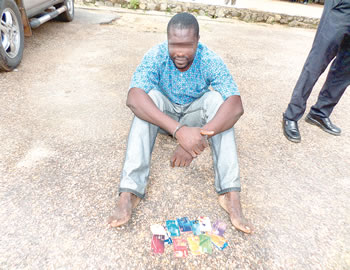 FOR the second time in less than two months, a suspect, Joshua Adejumo (40), who specialised in swapping Automated Teller Machine (ATM) cards of bank customers with disused ones, in the guise of helping the owners, has been paraded by the Oyo State Police Command, as another of his criminal exploits landed him in police net again.

Adejumo was first paraded on May 26 at the police command headquarters at Eleiyele, Ibadan and was subsequently arraigned in court. But his past deeds caught up with him again as he was arrested for withdrawing N543,000 from the account of a 64-year-old retired teacher, Mrs Aduke (surname withheld). He was among other suspects on whom the state Commissioner of Police, Leye Oyebade, briefed journalists on June 30.

The police commissioner had also disclosed that investigations by the Anti-Kidnapping Squad handling the suspect’s case revealed that he had once been arrested by the Kwara State Police Command over a stolen Toyota Camry which was recovered from him.

Narrating her experience to Crime Reports, the 64-year-old retired teacher said: “On January 27, I went to a bank to withdraw money from ATM. After punching my pin number, the ATM card got stuck. I kept punching and suddenly, I saw a man at my back. He stepped forward and punched the ‘clear’ button on the ATM, but I could not retrieve my card. The suspect advised that I should complain to the security man at the bank. I went to the security man to do so and he said I should come back the following day.

“To my surprise, when I got home, debit alerts started coming in to my phone at about 9p.m. I went to the bank the following morning and told him I wanted to retrieve my ATM card back but I could not see it. I was shocked when I was told that someone had been collecting money since the day before.

“I could not get myself together again because I did not hand my card to anyone since it got stuck in the machine. I went to the bank on the third day and was told that they had located where he was withdrawing my money at an old generation bank at Bodija area of Ibadan.

“The total money he withdrew was N543,000, leaving N1,000 in my account. I went to the police station to complain and since January, people from abroad and Nigeria have been helping me. The Oyo State police commissioner and the Anti-Kidnapping section also tried their best as they helped me to fish out the culprit with the information given them.”

The suspect however, said he fell into trouble for helping bank customers who had problems withdrawing money from ATM machines.

“I used to assist those who had problem withdrawing from ATM. That was how my past victims fell into my hands. On this particular woman, she was the one who called me to assist her. When the card got stuck, she went to complain inside. That was when I pressed clear and the ATM card came out. The mistake I made was that I did not go inside to give her.

“She was the one who punched her pin in my presence before the card got stuck. I withdrew N150,000 on same night and the following monring respectively and used the rest to make purchases of clothing items and shoes at a store at Idi Ape area by using POS.

“I stopped committing the crime since then but I was arrested based on what I did before. The other case is still ongoing at Iyaganku Magistrates Court.”

Adejumo said that his arrest in Kwara State was because he bought a Toyota Camry which was discovered to be a stolen car. “I bought it from one Alhaji Olaiya for N850,000 and paid N700,000, remaining a balance of N150,000 before I was arrested. I have stopped committing the crime but my past deeds are catching up on me. I have promised to repay the money,” he stated.