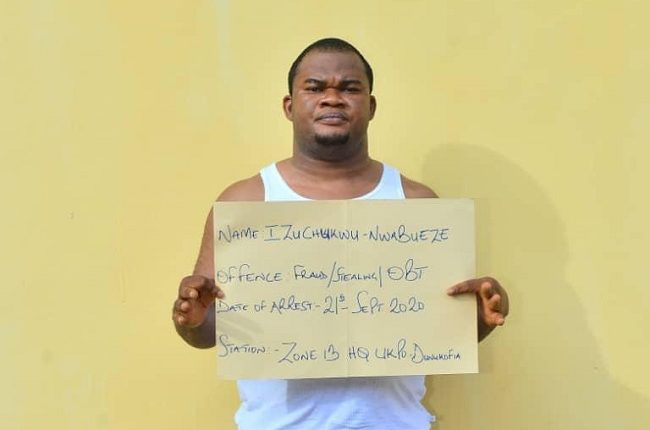 Police have arrested a 35-year-old man for allegedly posing as an aide to the Assistant Inspector General of Police, AIG in charge of Zone 13 Ukpo, Anambra State, Mr Danmalam Mohammed.

The suspected, Ichie Sir. Izuchukwu Nwabueze was caught while defrauding members of the public of their hard-earned money running to millions of naira under the false pretence of raising funds for the furnishing of the residential quarters of the AIG.

The arrest was contained in a press statement made available to journalists in Awka, on Wednesday, by the Zone Public Relations Officer, DSP Nwode Nkeiruka.

The statement reads in part: “In an effort to nip fraudulent tendencies in the bud, operatives attached to Zonal CID Zone 13, Ukpo have arrested one Ichie. Sir Izuchukwu Nwabueze ‘M’ aged 35 of Ukpo Dunukofia L.G.A who has been posing as an aide to the Assistant Inspector-General of Police.

“Impersonation that gave him the opportunity to defraud unsuspecting traders and bourgeoisies in Anambra State of their hard-earned money.

“The suspect who had pretended to be raising funds for the furnishing of an unknown Residential Quarters and for the installation of a Sound Proof Generating Set for the AIG Zone 13 Ukpo, cornered Hon. Sir Chris Okeke, High Chief Nwaigwe, Daniel both of G20 Foundation Awka, and collected a total sum of seven million, three hundred thousand Naira(N7,300,000) from them.

“The suspect also defrauded the sum of N1,000,000 from one Ifeanyi Umeh Lovelyn on behalf of the Anglican Bishop of Awka; Alexander Ibezim.

“The suspect had also approached Mr Akunwata Chuka Modebe Esq to join him in the forum he created to support the creation and activities of the newly created Zone 13 Police headquarters and allegedly convinced him to pay the sum of 1 million naira on the 1st of September 2020 which he did to his bank account.

“In the same vein, he also approached, one Mr Stanley Chibuzor, the CEO Brost Global Resources and collected the sum of N500,000 from him to allegedly enlist him in his Stakeholders forum, another N370,000 to purchase an IPad for the AIG, and yet another N1,150,000 for the furnishing of the office of the Personal Assistant to the AIG and when Chibuzor requested for the refund of his money, the said Izuchukwu gave him a bank cheque of N1,150,000 belonging to CHRISKWIK VENTURES LIMITED of 32 ISA WILLIAMS STREET, OKEARIN, LAGOS STATE which he presented to the bank but was bounced.

“Meanwhile, the suspect has voluntarily confessed to the crime, while the investigation is still ongoing after which suspect will be charged to court,” Nkeiruka added.

She said the AIG is using this opportunity to implore members of the public who may have been defrauded by the said Ichie Izuchukwu Nwabueze to report to the Deputy Commissioner of Police in charge of Criminal Investigations Department, DCP Echeng Echeng just as he cautioned the public to be wary of this new trend of criminal activity and report suspicions actions or persons through the Zone’s emergency number 08060463492 or the nearest police station or Command for a prompt response.

[ICYMI] EdoDecides2020: How Battle Between Oshiomhole And Shaibu For Etsako West Ended

Edo Deputy Governor, Comrade Philip Shaibu, battled his estranged godfather and former National Chairman of the APC, Comrade Adams Oshiomhole, for the soul of the Etsako West Local Government Area in the Saturday governorship election in the state… police AIG

Why government should jettison use of foreign professionals —APBN president