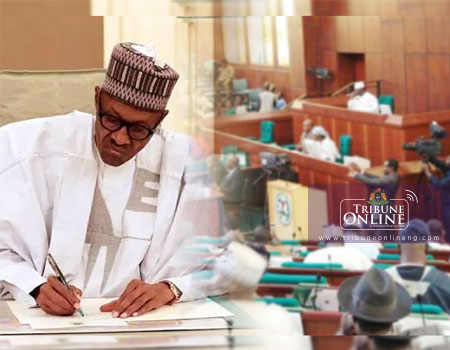 The Bill seeks to among others, amend the Companies Income Act, Value Added Tax, Customs and Excise Tariff and Personal Income Tax. Others subject to amendment include the Capital Gains Tax, Stamp Duties Act and the Petroleum Profit Tax. The Bill was submitted by President Muhammadu Buhari to the Joint Session of National Assembly while presenting the 2020 Budget proposal last October.

At the Joint Senate and House of Representatives Committee public hearing on the proposed bill, representatives of the Oil Producers Trade Section, the Institute of Chartered Accountants of Nigeria, the Manufacturers Association of Nigeria amongst others, who made presentations expressed strong reservations on the provisions of the Bill.

Mr. Sobayo, who stood in for chairman of the OPTS, Paul Mcgrath, faulted the move to increase Withholding Tax paid by oil companies on dividends paid out of petroleum profits to between 7.5 % to 10%.

The Oil Producers Trade Section represents 29 independent, indigenous and international exploration and production companies which operate about 90% of the oil and gas production in Nigeria.

Sobayo argued that increase in Withholding Tax would increase their tax liability and ultimately erode returns on their investment.

The OPTS noted that in the amendment, the definition of Services for VAT purposes and introduction of VA-T Reverse Charge on Imported Services would expand its members operational cost.

He said: “OPTS has identified some key areas of concern that could significantly erode Nigeria’s competitiveness. These concerns are summarised as follows:

“In Section 5 & 26, the introduction of 7.5-10% withholding tax (WHT) on dividends paid out of petroleum profits would increase the tax liability in addition to the pre-existing 85% PPT rate and erode returns on investment. OPTS suggests that this proposal be removed from the Bill, and instead considered within the wider context of a Petroleum Industry Bill so that its full implications for all stakeholders can be assessed and decided upon.

“In Sections 3(c), and 3(d) the definition of the profits of a foreign company subject to Nigerian corporate income tax with significant economic presence has been expanded in such a way that intra-company transactions are now likely to be subject to Withholding Tax of 10%. The determination of what constitutes the significant economic presence of a company has been left to the discretion of the Minister.

“OPTS is concerned that this has the capacity to increase the industry’s operating expenses and by extension its overall cost base.

“Additionally, the determination of what constitutes the significant economic presence of a company by the Minister (S.3(d)) introduces elements of discretion, thereby creating uncertainty.

“Sections 35 & 38 expand the definition of Services for VAT purposes and introduce VA-T Reverse Charge on Imported Services. These provisions have broadened the definition of services to “the services provided to a person in Nigeria, regardless of whether the services are rendered within or outside Nigeria”. With this expanded definition, invoices and similar transactions will be subject to Nigerian VAT of 7.5%. Beneficiaries of such services will now be required to self-account for VAT.

“OPTS is concerned that this amendment will widen the operating expenses base, thus, increasing industry operational costs. Again, OPTS recommends the adoption of the globally-accepted industry practice of exempting intra-company at cost services.”

While it identified existing tax under the Petroleum Profit Tax to include, 50% of taxable income for Production Sharing Contracts and 85% of taxable income for Joint Ventures, Royalties ranging from 7.5 to 20% of revenues based on terrain and price of Education Tax of 2% of assessable profit, NDDC Levy of 3% of the total annual budget and Nigeria Content Development Fund Levy of 1% value of contracts, amongst other the upstream oil sector operators argued that “additional taxes, such as those proposed in the Bill, will further increase our costs and tax burden, thereby constituting another significant challenge to Nigeria’s attractiveness for new investment.

“It will further erode Nigeria’s competitiveness in the global oil and gas industry to the advantage of other countries. Nigeria is currently struggling to attract investment in the oil & gas sector, having received only 3% out of the 73 billion dollars of major project investments in Africa from 2015 to 2019.”

President/Chairman of Governing Council, the Institute of Chartered Accountants of Nigeria (ICAN) Nnamdi Okwuadigbo lauded the initiative to increase Company Tax but faulted an arrangement where turnover would be used as criterion to exempt certain Small and Medium Scale Enterprises(SMEs).

“The intended amendments to various sections, between Sections 9 and 10 of the Company Income Tax will generate more revenue for the government as well as support Small and Medium Scale Enterprises (SMEs) through applicable tax reductions.

“Encouraging SMEs will go a long way in lifting a huge percentage of the Nigerian populace out of poverty. The amendments would further improve the level of transparency and accountability. in and amongst corporate entities, if implemented effectively.

“However, using turnover only as a criterion for exempting a small firm from Company Income Tax (CIT) should be reviewed. There are companies which are viable with a turnover of less than N25 million and could be brought to the tax net while a company may have a high turnover but less viable. Turnover should not be the only criterion for exemption. The tax rate for companies with a turnover of over N100 million should be clearly stated.”

For the Custom and Excise Duties, ICAN argued that “imposing Custom and Excise duty charges might lead to increase in the cost of locally manufactured goods and also make them to be less price competitive in the market.”

It expressed strong reservations over the implementation of the Stamp Duty as it noted that it was not clearly defined nor understood by the majority of the citizens. “The Stamp Duty in Nigeria shows a high-level multi-taxing process in its implementation. Although Stamp Duty policy will enhance revenue generation, however, its impact on economic growth, fairness and equity is debatable.”

Razaq Okulaja who spoke on behalf of the Manufacturers Association of Nigeria demanded that companies with less than N20 million capital base be exempted from the Company Income Tax. While he backed the imposition of VAT on luxury goods, he called for moderation in order not to discourage investment.

A representative of the Kynveld Peat Marwick Goerdeler, KPMG, Ajibola Olomola commended the federal government for providing incentives for the SMES. He noted that the National Bureau of Statistics has since acknowledged their contributions in providing gainful employment opportunities for Nigerians. He advocated for a tax holiday to encourage the growth of the SMEs

In his remarks, Chairman of the Senate Committee on Finance, Senator Adeola Olamilekan who presided over the session thanked the stakeholders for their contributions. He said the Executive Bill was a laudable initiative from President Buhari.

He said: “The Finance Bill, if eventually passed, will introduce sweeping changes in our taxation policy. We believe that the initiative to reform our tax system is laudable and the proposed modifications to the Fiscal rules around taxation are clearly aimed at creating an enabling business environment and alleviating the tax burden for Micro, Small and Medium Enterprises ( MSMEs). We trust that this Bill will encourage their investment and growth.”