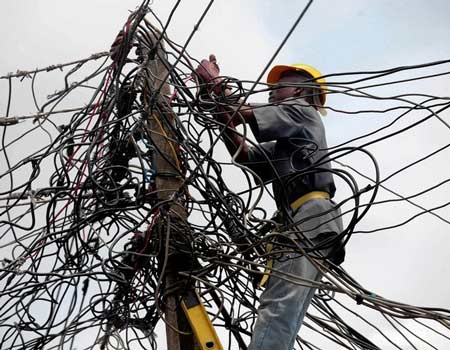 The court, however, ordered the remand of Husseni Musa, and Saidu Aliyu in police custody, accused of receiving stolen property, an offence they denied committing.

Judge Mohammed Marafa, however, gave Abubakar an option of N30,000 fine, after pleading guilty to charges bordering on criminal trespass, theft and mischief.

Marafa also ordered that Abubakar must produce a surety that would ensure his appearance in court to assist police in its investigations.

He adjourned the case until May 9 for the hearing of the bail application of Musa and Aliyu.

‎Police prosecutor John Okpa had told the court that one Ubah Chimezie reported the case at Kubwa Police Station on April 29.

He said Abubakar criminally trespassed into the complainant’s house and stole electrical wires valued at N400,000.‎

Okpa said that Abubakar was arrested while trying to escape with the wires.

‎He said that during police investigations, Abubakar‎ confessed to stealing electrical wires from the complainant’s house and sold them to Musa and Aliyu.