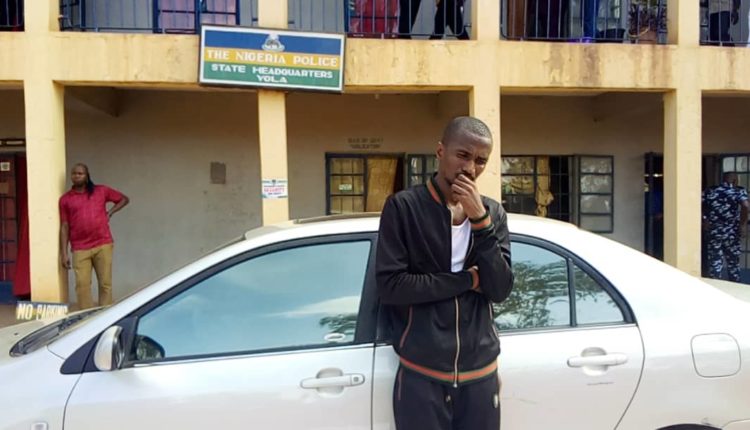 A member of a car snatching syndicate who stole a car at gunpoint in Abakaliki, Ebonyi State and took it to Adamawa State to sell has been arrested by men of the Adamawa State Police Command, the command disclosed on Sunday.

The 38-year-old man, Muhammed Sani, according to a statement by the police command’s Public Relations Officer, Sulaimon Nguroje, snatched a Toyota Corolla from the owner, Mr M.S. Adams, in Ebonyi State while pointing a gun at him and after snatching the car, he headed to Adamawa State to sell the car.

According to the statement, “the feat was recorded following intelligence report by the command’s intelligence bureau leading to the arrest of the suspect at about 6:30pm on May 21, 2020 and the recovery of a Toyota Corolla 2004 model and 44 sets of new T-shirts, shoes and set of trousers.

“On the 21/5/2020 at about 6:30pm following intelligence report, police operatives attached to the command’s Intelligent Bureau arrested one Muhammed Sani, 38 years and recovered one snatched Toyota Corolla, 2004 Model with 44 sets of new T-shirts, shoes and set of trousers.

“Suspect was caught after robbing one Mr. Adams M S of Abakaliki, Ebonyi State and headed for Adamawa to dispose it.

“Immediately the report got to police, investigation commenced and that led to the arrest of the man and recovery of the Toyota Corolla and other valuables.

“Consequently, the Commissioner of Police Olugbenga Adeyanju, while warning members of the public to desist from buying cars and other valuables from roadside vendors, equally assured that the command under his watch will continue to make Adamawa State unbearable to the criminal elements until they repent or relocate from the state.”