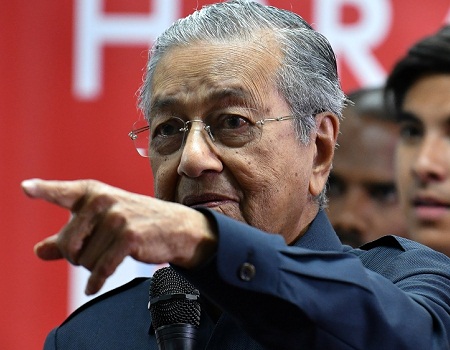 Chief Justice Raus Sharif and Court of Appeal President Zulkefli Ahmad Makinudin will step down from their posts on July 31, according to a statement by the chief registrar’s office of the federal court.

“His Majesty the King had given his assent to their resignation on June 8,” the statement read.

Mahathir’s opposition coalition scored a spectacular victory in a May 9 general election. The list of top officials who have either stepped down or been removed from their posts has steadily grown over the past month.

Malaysia’s legal fraternity had challenged the decision by the government of former Prime Minister Najib Razak to appoint Raus and Zulkefli last year, arguing that the two judges had exceeded the retirement age.

Last week, Malaysia appointed a new Attorney General, Tommy Thomas, who said there would be “no cover-ups”.

On Tuesday, his office said it was studying possible criminal and civil action in the 1Malaysia Development Berhad (1MDB) – which was founded by Najib – after receiving investigation papers on the state fund from the Malaysia Anti-Corruption Commission (MACC).

The new attorney general was brought in to replace Mohamed Apandi Ali, who in 2016 cleared Najib of any wrongdoing in the multi-billion dollar 1MDB scandal.

Najib has consistently denied wrongdoing. On Monday he said he did not benefit or steal money from the state fund.

Muhammad’s exit is seen as a fallout from the 1MDB scandal, after the finance ministry said last month that about $500m raised from a land sale by the government to the central bank was used to pay 1MDB’s liabilities last year.

The submission of the investigation papers by the MACC to the attorney general’s office indicates they may have completed their probe into SRC, which is a former subsidiary of the controversial state fund 1MDB.

It is now up to the country’s top prosecutor to decide if charges need to be filed or further investigations are needed.

Killings: APC will not get 5000 votes in Benue, former party chieftain vows