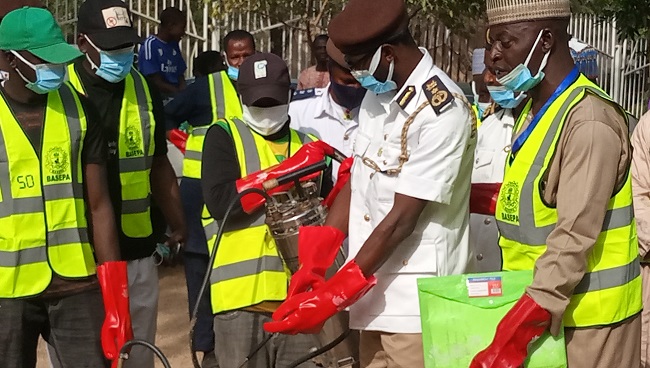 Bauchi State Environmental Protection Agency (BASEPA) in conjunction with the Bauchi State Agency for the Control of HIV /AIDs, Tuberculosis and Malaria (BACATMA) is to fumigate the 120 units of Bauchi metropolis against mosquito vector to check malaria infection.

The exercise which is expected to last for about one week was kick-started on Saturday and is to gulp the sum of N5m for personnel and products to be used for the exercise.

Speaking to Journalists at the commencement of exercise on Saturday, the Director General of BASEPA, Dr Ibrahim Kabir explained that the exercise was promoted by a complaint from an old man who recently accosted the State Governor, Sen Bala Mohammed Abdulkadir on the need for government to rise up to fight mosquito scourge in the metropolis.

The DG added that immediately, the Governor gave a marching order to both BASEPA and BACATMA to liaise with each other and conduct the fumigation not only in Bauchi metropolis but all across the state.

He stressed that the exercise will be diligently done to ensure that the aim was achieved within the short period assuring that every precaution will be taken to minimize risk to the general public.

He therefore said that the exercise will be conducted in the evenings between 3 – 6pm everyday when people are not many on the streets appealing for cooperation by residents of the metropolis to give way to the personnel during the exercise.

Ibrahim Kabir also advised that roaming animals should be restricted while the exercise lasted in order to avoid coming in contact with the chemical which though not too harmful can be dangerous to the animals.

The DG expressed optimism that with the cooperation of the residents, the exercise will succeed and mosquito scourge will be eradicated therefore reducing the risk of malaria infection.

The British Parliament at the Westminster Hall held a debate on ‘e-petition 554150, relating to Nigeria and the sanctions regime’ on Monday. The government of the United Kingdom has however responded…Malaria scourge  Malaria scourge

The surprise visit made on Friday night by the leaders of the ruling All Progressives Congress (APC) to former President Goodluck Jonathan at his residence in Abuja triggered a stir in the major political camps, resulting in at least four possible theories..Malaria scourge  Malaria scourge

Against all odds, Rivers APC to participate in membership exercise