Arts and Culture
By Akintayo Abodunrin On Jul 11, 2021 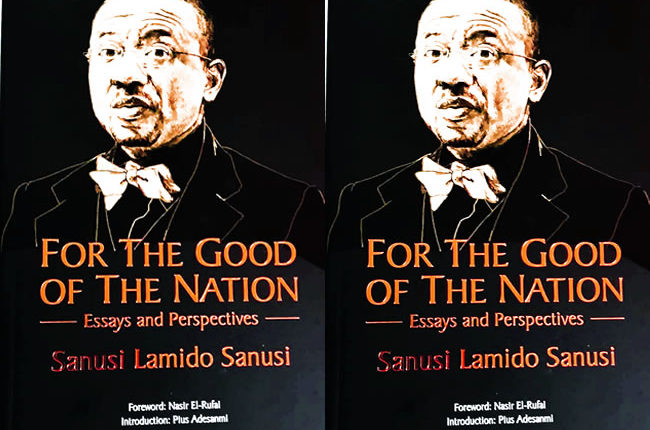 A review of Sanusi Lamido Sanusi’s For The Good Of The Nation – Essays And Perspectives by UZOR MAXIM UZOATU. ALFA Books, Ikoyi, Lagos; 2021; 509pp

Sanusi Lamido Sanusi, former Governor of the Central Bank of Nigeria (CBN) and the past Emir of Kano, would want to be remembered as “a man who always spoke truth to power”. He stresses that he has no presidential ambitions, but one would not be surprised to see him manifest at a later date as Nigeria’s President.

Sanusi ranks amongst the most controversial of living Nigerians. His book, ‘For The Good Of The Nation – Essays And Perspectives’, therefore compels considerable attention. Remarkably, the book does not include Sanusi’s writings on finance and the economy.

It is divided into five parts, notably, ‘Identity, Politics & Democracy’; ‘Reflections On Shari’ah’; ‘SLS And The Gender Question’; ‘Islamic Theology and Philosophy’; and finally, ‘Interviews’.

‘For The Good Of The Nation – Essays And Perspectives’ has been in the works for 10 years, that is, after the publisher Tunde Fagbenle approached Sanusi “sometime in 2011, with the proposal to put together my articles and papers published largely between 1998 and 2005 in academic books, conference proceedings, newspapers and internet websites.” Sanusi’s controversial stints as Governor of the CBN and Emir of Kano put a hold on the publication until he “decided the time is now right for this book to come out.”

In his Preface to ‘For The Good Of The Nation’ which Sanusi signed thusly “Muhammad Sanusi II, CON, 14th Fulani Emir of Kano, September, 2020”, the author reveals that the first time he ever published “anything was at the age of fourteen, as a Form 4 student in King’s College, in the 1975/76 session.”

Sanusi’s soul-mate in life as in controversy, Nasir El-Rufai, supplies the Foreword dated July 2012, and the words are stirring: “Lamido is angry about the Nigerian condition and is unsparing in his exposure of the hypocrisy of our political and economic elite in creating and sustaining this condition for their enrichment. He spares no one, even the Fulani royalty and traditional northern institutions into which he was born, or the traditional Islamic clerics, one of which his illustrious grandfather and former Emir was until his death. I have known Lamido for nearly forty years, and in my opinion, every position he has taken, view expressed and everything he has done is driven by a craving for justice and equal opportunity for all, and nothing more.”

The mourned one, Professor Pius Adesanmi, who died in the Ethiopia Air crash in 2019, penned the introduction dated May 2012 to ‘For The Good Of The Nation’ which begins this way: “This book is the book. It is auto/biography, history, politics, political economy, identity, and the sociography of nationhood.” In Adesanmi’s view, “If Sanusi takes no prisoners in his critique of Northern society, understandings of Islam, and Northern political elite, do not expect him to take prisoners in his critique of Yoruba and Igbo societies and their respective political leaders and structures.”

The issue of restructuring is all the rage in modern-day Nigeria. Sanusi controversially wades into the matter, noting “that the Igbo were the prime movers of the first successful military mutiny which eliminated the political leaders and senior officers of the North and West while letting-off those of the East.” He then follows to formula by indicting the Igbo and General JTU Ironsi for promulgating the military Decree 34 of May 1966 that transformed the Federation to a Unitary State. Of course the North has used the unitary status over the years more than all others to further prebendalism.

Sanusi condemns the bigotry and chauvinism of his fellow Northern Muslims for raising hell over President “Obasanjo’s appointment of Northern Christians into his cabinet”, and then goes ahead to cite the instance of “Retired Christian Generals, from Takum to Zangon-Kataf, who find themselves overshadowed by more junior, but Muslim, Generals in the North, take out their frustration by financing and coordinating religious conflicts. One of them has already been convicted once.” History always has its two sides and more.

In his take of what he entitles “The Yoruba Factor And Area-Boy Politics”, Sanusi avers that the Yoruba political leadership, in line with the view of Balarabe Musa, “has shown itself over the years to be incapable of rising above narrow tribal interests and reciprocating goodwill from other sections of the country by treating other groups with respect. Practically every crisis in Nigeria since independence has its roots in this attitude.”

Sanusi’s litany of charges on the Yoruba runs thus: “The Yoruba elite were the first, in 1962, to attempt a violent overthrow of an elected government in this country. In 1966, it was the violence in the West which provided the avenue for the putsch of January 15. After Chief Awolowo lost to Shagari in the 1983 elections, it was the discontent and bad publicity in the South-West which led to the Buhari intervention. When Buhari jailed UPN Governors like Ige and Onabanjo, the South-Western press castigated that essentially good government and provided the right mood for IBB to take over power.”

On his topic, “The Igbo Factor And The Reasonable Limits Of Retribution”, Sanusi writes: “The Northern Bourgeoisie and the Yoruba Bourgeoisie have conspired to keep the Igbo out of the scheme of things. In the recent transition, when the Igbo solidly supported the PDP in the hope of an Ekwueme presidency, the North and the South-West treated this as a Biafra agenda.” Sanusi then warns that “the nation is sitting on a time-bomb” because the young oppressed Igbo may not take the marginalization for much longer and “will soon decide that it is better to fight their war…”

In all, Sanusi’s ideas are progressive and on the side of the masses. He weighs in radically “on the islamisation of politics and the politicisation of islam”; rises up “in defence of Reverend Father Kukah”; dispassionately intervenes on “politics and Shari’ah in Northern Nigeria”; and deliberates insightfully on “Islamic Theology and Philosophy.”

The revelation, for me, of ‘For The Good Of The Nation’ is the depiction of Sanusi Lamido Sanusi as a feminist. The issue of women in Islam is one turf where angels fear to tread, but Sanusi refuses to be deterred. In two and a half years of becoming Governor of the Central Bank, he appointed seven female directors, even as only four women had ever been appointed directors in the 50 years of the existence of the Central Bank before his appointment.

For peace and equity to take over in Nigeria, committed change-agents like Sanusi are needed from all sections of Nigeria, especially in the conservative North, “to bring together good Yoruba, Hausa, Igbo, Ogoni and Angas men and women; good Christians and Muslims; to run the affairs of this country…”

TB Joshua will forever remain in my heart —Wife

‘I tell stories because it gives me purpose’