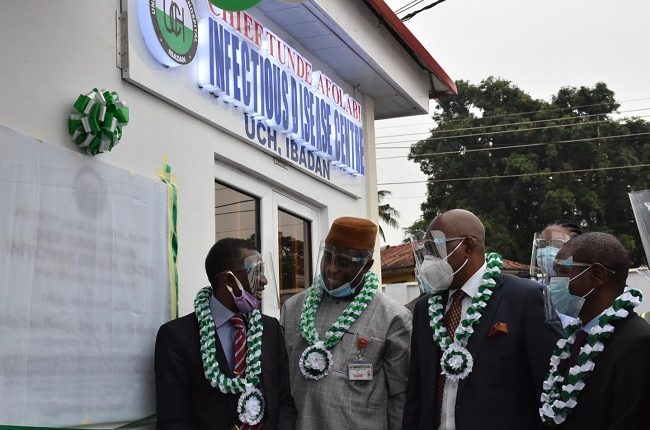 Oyo State governor, Engineer Seyi Makinde unveiling the commemoration plague of the centre donated by JOSEPHUS Foundation at the hospital, said the centre will contribute towards improving healthcare delivery services in the state as efforts continue to battle COVID -19 in the country.

Engineer Makinde, represented by the state’s commissioner for Health, Dr Bashir Bello said many cases of COVID-19 had been imported into the state and as such the infectious disease centre would further help to reduce the mortality and morbidity of the disease.

He added, “the foundation is not only helping the federal establishment, but we are also benefactors in the state because a similar centre is been organized at the ring road state hospital.”

Governor Makinde who stated that his administration’s policy on health is to improve health care services through collaboration and by engaging partners declared that the state’s emergency operation centre target was also curtailing infectious diseases like Ebola, Lassa fever and COVID-19.

Chairman, JOSEPHUS foundation, Chief Tunde Afolabi said the centre was the foundation’s way of identifying with the hospital and urged the hospital to look inwards to determine how it could restore its lost glory.

Chief Afolabi, speaking through Nigeria’s former Head of Service of the Federation, Professor Oladapo Afolabi said for UCH, Ibadan to regain this lost glory, the hospital will require to change drastically its funding model.

He stated: “There are some places in the world that are improving as we speaking. Their funding model is different from what you have in UCH. They are not depending on the federal government neither on donations from people or alumni. They have a kind of model that provides a product that sells itself, so let’s look for those products that will sell itself and that people will look for the way flies will look for honey.”

“Look at John Hopkins, you know the way they run it and many of such hospitals they are not dying. The funding model we are using now cannot deliver this hospital, it cannot because as this huge money is coming, it is squeezing away.”

Professor Otegbayo, said no government at any level can tackle the problems in the health sector alone because they are enormous and overwhelming, and urged for increased support for the hospital to take care of Nigeria’s health

He stated that the hospital had attended to 159 patients with COVID-19 of which 18 died and the others survived.

According to him, “we have that mortality because we take the most severe cases is brought to UCH, Ibadan that is the only place where they can be treated. Some of them have co-morbidities like hypertension, diabetes, asthma and some other chronic lung diseases. Also, some of them had kidney failure that requires dialysis, which is not available in many other places in Oyo State, so that is why we recorded mortality at UCH.”

Protest at US Embassy in Abuja over Southern Kaduna killings