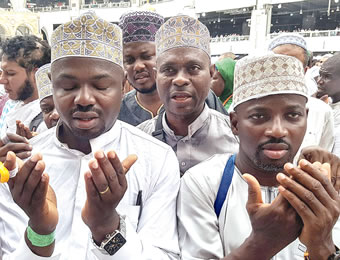 The Oyo State governor, Engineer Seyi Makinde, has congratulated Muslims in the state on the completion of the month-long Ramadan fasting.

He expressed gratitude to Muslims and residents of the state for remaining steadfast despite the situation imposed on the state by the COVID-19 pandemic.

The governor equally rallied them to use the auspicious occasion of the Eid-el-Fitri to make supplications for themselves, the state and Nigeria.

A statement signed by the Chief Press Secretary to the governor, Mr. Taiwo Adisa, quoted Governor Makinde as saying that it was regrettable that Muslims in the state and across the country cannot observe Eid-el-Fitri prayer at the eid praying grounds due to restrictions occasioned by the COVID-19 pandemic.

Also, Ekiti State governor, Dr.Kayode Fayemi has felicitated Muslim faithful in the state and in the country on the celebration of Eid-el-Fitr, which marks the end of the holy month of Ramadan.

The governor in his Eid-el-Fitri message in Ado-Ekiti on Saturday congratulated the Muslim faithful on the completion of the 30-day fast, stressing that the spiritual exercise had drawn them closer to Allah.

Dr. Fayemi who is the chairman of the Nigeria Governors’ Forum admonished Muslims to put the teachings of the holy month to good use in all undertakings.

In his Salah message, Delta State urged muslim faithful in the country to extend the spiritual benefits of Ramadan, which are love, peace and justice to their daily living as these will contribute to the development of the nation.

The governor,through his Chief Press Secretary, Olisa Ifeajika on Saturday in Asaba, Okowa said that this year’s celebration was coming at a time when the world was plagued by the coronavirus pandemic and thanked them for their sacrifices and prayers for the nation and their decision to celebrate in their homes because of the prevailing pandemic.

As Muslims celebrate this year’s Eid-el-Fitr, which marks the end of Ramadan, Governor Ifeanyi Ugwuanyi of Enugu State has enjoined them and indeed all Nigerians, to remain resolute in their abiding faith in God through prayers and sacrifice as the nation battles to contain the spread of the novel coronavirus cisease (COVID-19).

In a statement, Governor . Ugwuanyi who congratulated President Muhammadu Buhari and other Muslim faithful on the successful completion of Ramadan, added that the religious exercise will go a long way in the nation’s collective efforts to winning the war against COVID-19 as well as sustain the peace, unity and progress of the country.

While wishing all Muslims a pleasant celebration, the governor urged Nigerians to stay safe, remain steadfast in prayers and continue to love and cherish one another.

In the same vein, Zamfara State governor, Bello Matawalle has said his government expended the sum of N2.9bn for Ramadan feeding as the fasting comes to an end.

He made this known in a state broadcast to celebrate this year’s Eid-Fitr on Saturday .

According to him, the sum of N55,200,000 was earmarked to procure  280 cows which were distributed to civil servants, groups and communities to mark this year’s Eid-Fitr celebration.

“We have equally distributed a consignment of guinea brocade and textile fabrics  to forty thousand orphans across the state to enable them have new dresses for the sallah celebration.

“As part of their effort to put smile on the faces of its workers,” he said, “I instructed the Ministry of Finance to ensure that salaries were paid from 18th of May to enable the civil servants prepare for the sallah occasion.

In Gombe State, governor Inuwa Yahaya urged Muslims to sustain the lessons learnt in the holy month of Ramadan and replicate them in their daily lives for the good of the society. In his goodwill message to the people, Yahaya stated that, “Eid-el-fitr festival connotes sacrifice, selflessness, love and obedience to the tenets of Islam. I therefore enjoin us to draw enduring lessons from the Ramadan and show love to one another as well as promote harmony and peaceful coexistence among our diverse people.

His Plateau State counterpart and chairman, Northen Governors Forum, Simon Bako Lalong rejoiced with Muslims as they mark another Eid-el-Fitr under unusual conditions occasioned by the Corona virus pandemic.

According to statement signed by the Director of Press Affairs, Dr. Makut Simon Machan, Lalong congratulated the Muslims for successfully undertaking the Ramadan fast being a key injunction of the Islamic faith.

He said, “While this year’s Eid-el-Fitr may be celebrated in solemnity and privacy of your homes, the occasion nonetheless presents the opportunity for our Muslim brothers and sisters to reflect on the spiritual benefits accruing from their fasting and prayers and apply it to their lifestyle for a better society where there is love, peace and tranquility”.

Fani-Kayode’s defection: Despite my push for APC Abuja hasn’t given me a call ―…