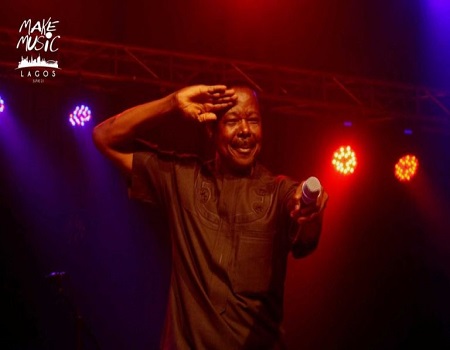 “The pandemic may rage on but the music must keep playing,” said the ‘Make Music Lagos’ 2020 organising committee, comprising of Showgear and its partners, as they announced the schedule of events for Make Music Lagos 2020 as part of the buildup to the upcoming celebrations of World Music Day in Lagos which will run for a week from Monday June 16 to Monday June 22.

Make Music Lagos, which is now in its fifth year of existence, is going to be exclusively online for the first time following the restrictions on large public gatherings by the Lagos State government.  A move and experiment, by its organisers, that promises to be interesting and could possibly offer a solution to the near collapse of activities in the Nigerian music and associated industries.

The chairman of the organising committee and Chief Operating Officer of Showgear, Mrs Deola Akinyemi, had this to say about the announcement, “The 2020 edition of Make Music Lagos had been in the works long before the pandemic struck and many feared that we would not be able to pull through with this edition, but I am thankful for the tenacity of my team and the availability of the technology to power a virtual edition. We are in uncharted waters, but we believe that we can make a positive impact in the lives of music enthusiasts as well as in the industry as we go on this exciting journey.”

The MML 2020 organisers have also announced that they will be launching the ‘COVID Took My Job’ initiative to provide support to selected industry professionals whose livelihoods have been adversely affected as a result of the coronavirus pandemic.

On Sunday, June 21, which is World Music Day, Make Music Lagos is going to be hosting a variety of free online music events to get the music fans super excited. There is the ‘home studio’, a new addition to the lineup, which will have leading music producers (like Music Magnate, Olaitan Dada, Mr Wols, Crackermallo) make beats from their home studio in real-time. In the past, these beats would have been made on the streets of Lagos as part of the ‘street studio’ events. There are also the Make Music Lagos concerts, hosted in collaboration with partners, which will give many fast-rising acts the opportunity to perform to large audiences on YouTube and Instagram. And finally, there will be the DJ online party, another addition to the lineup, which will have a leading DJ and hypemen hosting a high-energy online party.

Last on the list of events for the 2020 edition of Make Music Lagos is the ‘Lagos shutdown concert’, hosted by L’avenida multipurpose centre, which historically has had the largest audience and some of the biggest names in Nigerian music on stage each year, on Sunday 21st June on YouTube.