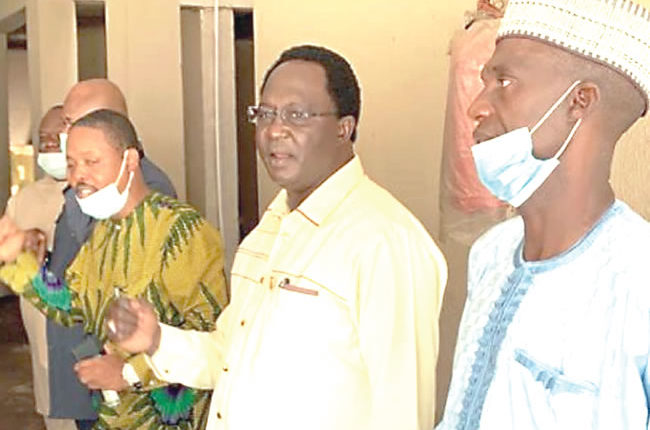 The President of Nigeria Labour Congress (NLC), Comrade Ayuba Wabba, has declared that the major role of the congress and the trade unions is, primarily, the welfare of their members and must always join a struggle that will bring benefit directly to the workers.

Wabba made this known even as he extolled the virtue and paid tribute to the late National President of Nigeria Union of Local Government Employees (NULGE), Comrade Ibrahim Khaleel, saying that his achievements should be documented that such a person was able to make a mark while he was leading a very important organization.

He said: “This is just a lesson that all of us need to draw from this very sad event and sad incident. All of you must take heart. The salary must continue, the struggle also continues. The Struggle cannot end. In the best of the economies, there is struggle and in the words of economists, there is also struggle.

“That has been part and parcel of our responsibilities as a union, and that is why in each struggle, we try to look at what can benefit workers because any struggle without direct benefits to the workers is nothing. It is not just to join a struggle that will not bring any benefit directly to the workers.”

He added: “We are an organisation that is membership based. Membership based means people pay check off dues because they want services and services means they must have food on their table.

“Those are the core issues; and without all of these, there is no need to form a union. If a worker will not benefit, he will ask you, why do I need to join the union. First and foremost is what he will benefit as a worker, then possibly as a citizen.

“Therefore, this should continue to judge our  engagements, so we don’t lose track. We are a membership based organisation, therefore we must service our members.”

He pointed out that workers are struggling to join unions and insisting to belong to unions “because they realise that when they join the union, their welfare is secured, their interests will be protected and they have a say because it is a democratic organization where workers will also have a say.”

On the sudden death of their National President, who was also the Treasurer of NLC, Wabba said: “I convey to you our deepest condolence to the leadership of NULGE and I urged you on the strength of incidence that has happened, let us build a strong union, let us emerge, and let us shame those who want NULGE to be destroyed.”

He commended the leadership, saying “we will continue to guide you,” and assured that the NLC would continue to give their issues priority.

On the NULGE crisis, Wabba assured that the right thing would be done, “without necessarily taking away that there are issues and those issues can be resolved on the negotiation table.”

He said: “We should discourage all those who are trying to destroy NULGE. There could be grievances but grievances are better resolved on the table. We will see how to navigate the issue and resolve it. Under the labour laws, there are very clear provisions on how those disputes could be resolved.”

State of the nation: Direct venoms to your elected representatives, you didn’t elect…