Agriculture
By COLLINS NNABUIFE On Dec 22, 2020 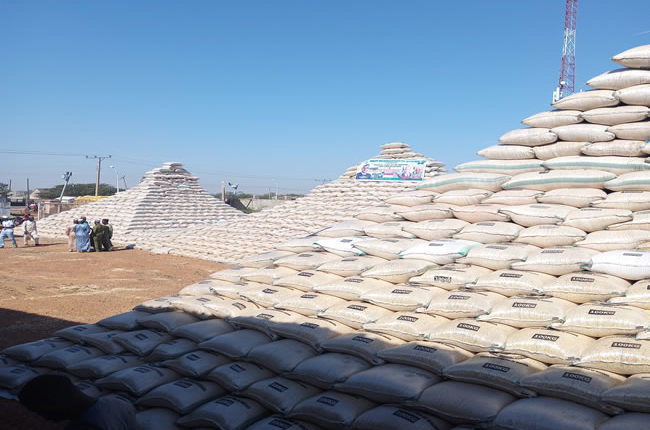 No doubt, COVID-19 lockdown era and flood in Nigeria affected food production especially maize. Nigerian government had to fall back to importation of maize to meet local demands. COLLINS NNABUIFE was in Katsina during the flag off of the 2020/2021 dry season farming. He X-rayed the recent activities of the Central Bank of Nigeria (CBN) and the Maize Association of Nigeria to improve local production:

MAIZE production in Nigeria has suffered major setback following the lockdown as a result of COVID-19 pandemic and flood which ravaged many farms across the country.

These incidences led to scarcity of maize which affected local Millers of maize and the poultry industry almost shut down completely because over 70 per cent of the raw materials used for poultry feed production is maize.

The Nigerian government in an attempt to save the poultry industry from collapsing, approved the release of 5000 metric ton of maize to poultry farmers. Though commendable, the quantity of maize released could not salvage the situation.

The Central Bank of Nigeria (CBN), however, granted approval to four companies to import 142,000 metric tons of maize into the country to make up for the shortfalls in maize supply.

In another swift move to produce more maize and avoid future importation, the CBN and the Maize Association of Nigeria (MAAN) have embarked on all year round production of maize.

This move by the CBN is targeted at involving more maize farmers, providing inputs for them through the Anchor Borrowers Program me (ABP).

Elenwor Ihua, Deputy Director Development Finance Department of the CBN said during the just concluded wet season farming that the Bank financed over 200,000 farmers including members of MAAN.

Then for the dry season farming, the CBN is targeting to support farmers to cultivate 750,000 hectares of land with MAAN also captured.

“This wet season that just passed which they are doing the harvest now, we financed over 200,000 farmers across 200,000 hectares, MAAN took a chunk of that number and we feel strongly that that was a major initiative that has never been done in that number before.

Ihua said the CBN was working assiduously with the leadership of MAAN in an attempt to ensure that an end is put on maize importation.

He said the Bank had been financing smallholder Farmers under the auspices of MAAN to ensure that they were able to improve their yields.

He noted that before now the yields used to be about two tons per hectare, but now with high yielding seeds and the support of the CBN, smallholder farmers across the country are able to produce at least 4 tonnes per hectare.

The MAAN President, Dr Bello Abubakar said over 120,000 maize farmers participated in the wet season ABP where they cultivated about 150,000 hectares.

“And right now you can see that we are at aggregation level which farmers are now bringing their produce as part of their loan recovery, you can see here where we are, they brought their maize.

“So, we have produced enough and then if you look at the level of the maize production in Nigeria, many farmers cultivated maize, so there is enough maize now in Nigeria that was produced this year,” Dr Abubakar said.

Dr Bello therefore said due to the flood that ravaged maize farms across the country this year, MAAN with the support of CBN would cultivate about 400,000 hectares during the drying season farming which commenced this December.

“Also, in this year’s wet season, there was a flood and a drought, so because of that we are going into dry season farming and we are going to cultivate about 400,000 hectares and the CBN is going to finance about 750,000 hectares with some other commodity Associations and other prime anchors,  Definitely this year to 2020/2012 season will be a very good year for maize production in Nigeria.

He said the project was targeting about 22 states for the dry season farming.

“We have about 15 offtakers for this wet season that we have concluded, we have  signed MoU with them, some of them are maize processors and maize millers and then for the next season, some of them are still coming up”, he added.

Ihua said the CBN was working towards ending maize importation into the country alongside MAAN.

“So we working assiduously with MAAN, the president and the executive and the members across the country are working with us to ensure that we support smallholder farmers, and ensure that we are able to feed this nation.

“Part of our target is also to ensure that we discourage importation of maize, and that’s why we are ensuring that we increase the production so that there will be availability of Maize in the country,” he noted.

Furthermore, he explained “the reality is that we must face some facts, Nigeria has the land mass and the capacity and the workforce to be able to produce enough maize that can feed this country.

“So there was the willingness at that time to allow maize to come in to address whatever shortfall, However with this initiative that we’re doing with the likes of MAAN and other organisations, what we intend to do is to ensure that we have at least two cycles of production.

“So you are not going to have a situation where there are going to be price variations and at the end of the day it will discourage the situation where we will require importation. So importation will no longer be necessary because there will always be availability of maize.

“So for us it’s a given, that our approach and our model ultimately will ensure that there would not be need to import maize into the country.

Also reacting to whether Nigeria would have enough maize to end importation, Dr Abubakar said “of course, that’s why I emphasised that maize was produced in this country this year, and then again, the dry season that is coming will get more maize in this country.

“So there is no need for any importation of maize because whatever they may need, their demand, they will get it here with our local production.

“And we are also calling on these maize millers such as the feed mills and other maize processors to come and join us, let’s go to the farm together, so they too can produce whatever they want because we have all the varieties of maize seed that they need in this country.

“And now we are using aflasafe which controls the aflatoxin contamination which they are complaining about and that problem is already solved.

“So there is no any need for any importation of maize in this country.

Ihua said the CBN does not give cash to farmers in form of loan, instead, farmers are provided with inputs to help them cultivate, then after harvest, the farmers are expected to pay back to the bank using their produce.

“Part of what we have done and part of our unique nature, the financing model, is to ensure that we don’t give cash, so what we do is we provide the input and the understanding is that when the farmers harvest, they release a portion of their harvest.

“So, for us we have designed it in such a way that recovery becomes seamless, so it’s not about asking the person for money, just give us the maize, then we take the maize, we will give it to the people who require the maize and at the end of the day payment is made.

“So we’ve developed a model that we have tried, it’s working and it makes repayment much more easy. So the kind of partnership we have in MAAN now, is so seamless that at the end of the day what we expect is just increase in production because we know once there is increase in production, repayment will be made. So that’s really what we have done and it’s really a game changer for us”, he noted.

On the response by farmers on loan repayment, Ihua said “it’s been fantastic, we are here in Funtua and you have seen the maize pyramid, it has never happened before, they’ve never had this kind of pyramid before just because of the model that we introduced, it is the Anchor Borrowers model that the Central Bank is using where we fund rather than give cash, but provide the input then we’ll take the maize in exchange and it’s been working well”.

Dr Abubakar said the association has collected over 30,000 bags of maize from its members as part of loan repayments.