Magodo: Lagos to search for 549 plots of land for aggrieved Shangisha landlords 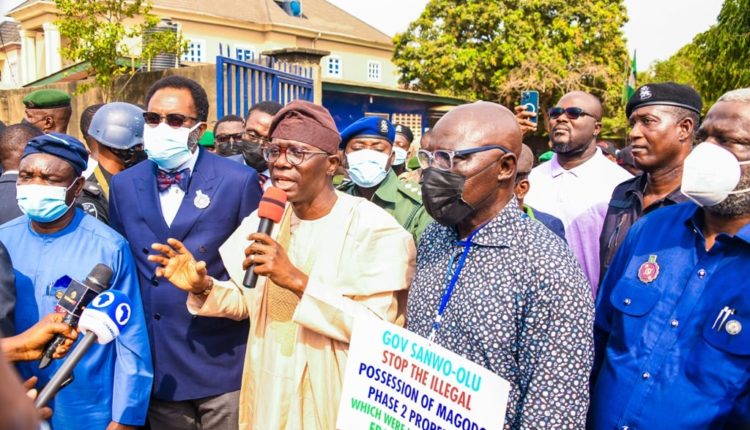 THE Lagos State government is currently searching for 549 plots of land in order to finally resolve the lingering dispute over the Magodo Estate land in Shangisha area of the state.

Governor Babajide Sanwo-Olu, who spoke with newsmen on Wednesday shortly after a meeting with various stakeholders involved in the land dispute at the Banquet Hall of the Lagos State Government House, Ikeja, said government would identify land within the Shangisha Estate and other parts of the state to get the 549 plots of land for the aggrieved landlords to resolve the land dispute that had lingered for over 38 years.

Governor Sanwo-Olu and the stakeholders also agreed that the police officers who had laid siege to the area be withdrawn.

The meeting was attended by representatives of Shangisha Landlords Association, Magodo Residents Association, counsel for the stakeholders and top government officials.

The governor said to this end, the committee long set up by the state government should get to work as from Friday to ensure resolution of the matter.

“We have their counsel representing the stakeholders, the various families. It has been a full house and we have all listened extensively to all parties and to all stakeholders.

“I am happy to inform gentlemen of the press that the issues had been well laid out; we are not in any disagreement or misconception around the fact that there is a Supreme Court judgment or a judgment that says that Lagos State government should give 549 plots to the Shangisha Landlords Association. All of that has been taken into context and it has been resolved that the committee that the state government had set up before now should get to work immediately, meaning from Friday, they will be working with the stakeholders, identifying available plots of land around Shangisha area. Drone will be flown, surveys will be made and available plots will be identified.

“In the event that available plots are identified, allocations will be made timely and additional plots, if we don’t have the right numbers, will also be identified at mutually agreeable locations with the other stakeholders.

“The government will also review the list of all the allottees, 549 of them, and we will ensure that the injustice that the Shangisha Landlords Association had for 38 years, we will offer restitution and give them the deserved plots.

“We also agreed that there should be de-escalation of police movement in Magodo because we have all agreed that we can resolve this things on the table among ourselves, and the process has started and so there is no need for men of the police to come from either Abuja or wherever into Magodo again and that the peace that Magodo is known for is assured.

“The Shangsha Landlord Association that went to court had also been assured that in no distant future, allocation of plots of land would be given to them once full determination of the areas has been fashioned out.

“We will all be reporting and working transparently, ensuring fairness and equity, justice is played out and we will ensure that at the end of the day that we have a win-win situation, stakeholders will be happy, residents will be happy and the government would have been seen to have done what is fair, just and equitable to all.”

Fielding questions from newsmen, the chairman, Shangisha Landlords Association, Chief Adebayo Adeyiga, said though the meeting was cordial, it was just the beginning of a long process for the resolution of the dispute.

Adeyiga said, “From what has happened from the last administration, I am a little bit optimistic, not overly optimistic because I know civil servants. When we come here now we see lots of people who did not go to court coming here and they want to hide under our judgment to get something from government. For 38 years, they did not go to court, they did not file any case anywhere in the court.

“Let see what the government is going to do I don’t know anybody other than my members who have fought with me for the past 38 years.

“I have asked my lawyer to give the governor my demands. The demand is that the remaining land there be given to the Shangisha Landlords Association. The rest, they will pay on ratification and pay gratuity to us. “We are not going to move to another place because these people, you don’t know, under the pretence, they might have collected another land from other people and put us there. That is why I rejected another relocation from the onset. I will be willing to engage with the government.”

I have no interest in who emerges my successor —Buhari