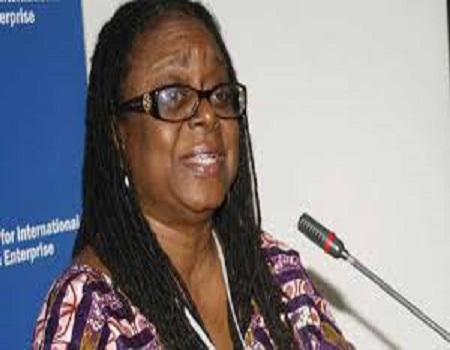 Ruwase had meritoriously served the Chamber in the same capacity in the last two years.

Disclosing this in a statement, the Director General of the Chamber, Mr Muda Yusuf, stated that Mabogunje emerged as President after a duly conducted election at the Chamber’s 131st Annual General Meeting held, today, Thursday, at the Commerce House, 1 Idowu Taylor Street, Victoria Island, Lagos.

A Fellow of the Institute of Management Consultants, Mrs Toki Mabogunje is an astute boardroom guru who specializes in business development, value chain development, project financing, strategic organization and management and the provision of legal and business advisory services to small and medium enterprises.

Prior to her election as the Chamber’s president, she had served the Chamber, in various capacities such as Deputy President, Vice President, Member, Trade Promotion Board, Chairman, Professional Services Group, Chairman, Financial & General Purposes Committee among others.

“Indeed, we are very pleased as Mrs Toki Mabogunje, FIMC, CMC assumes the role of President of the LCCI. As a Council Member and a key officer of the Chamber, she has brought her extensive knowledge and experience to bear on the Chamber mandate and has provided quality perspectives to deliberations at the Chamber.

“Her election will enhance the Chamber’s role as a leading advocate of best business policy and practice, with the objective of promoting and protecting the interest of its members and the business community at large,” Yusuf stated.

He described the investiture of Mrs Toki Mabogunje, as President of the Lagos Chamber of Commerce and Industry (LCCI), as a recognition of her contribution and commitment to the ideals of the Chamber movement, its public policy advocacy and protection of the interests of the Nigerian business community.

The newly-elected president, Yusuf added, will be formally inaugurated as President of the Chamber on Saturday 7th December 2019 at an Investiture Ceremony billed to hold at the prestigious Eko Hotel and Suites, Victoria Island, Lagos.