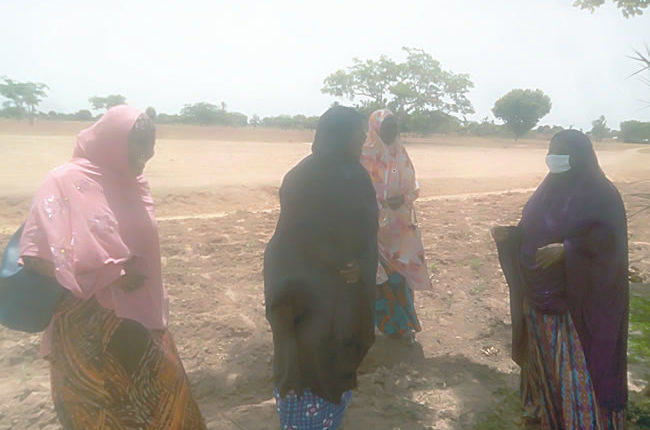 ADAMU AMADU RUFA’I reports that women farmers in Jigawa State are facing hard times as a result of the COVID-19 pandemic and destruction of their farms by herdsmen thus limiting their ability to contribute to food security in the country.

THE journey from Dutse, the Jigawa State capital to Gamsarka village in Auyo Local Government Area of the state is a tedious three hours, especially due to the on-going rehabilitation of the Auyo irrigation project embarked upon by the Federal Government with the assistance of the World Bank.

The goal of the journey was to meet women farmers in their homes and on their farms to see firsthand their travails as they try to contribute their own quota to food security in the country while also struggling to get out of poverty.

Malama Binta Audu Gamsarka, a widow with five children – two girls and three boys aged between 8 and 15 – narrated to Sunday Tribune how she struggled to survive after the death of her husband six years ago until she went into farming in order to get out of poverty.

Binta, who lives in a three-room house built with clay and fenced with dry corn stalks said that after her husband’s demise life became very difficult for the family. Sometimes, she had to send three of her children to the bush to get cow dung or to cut grass to sell in order to earn some money for food.

“None of the children was attending any formal school because they were all preoccupied with struggling to earn a living. But since I embraced farming three years ago, the family life completely changed.

Continuing, she said: “After harvesting the rainy season crop, I also planted the rice for dry season and within the first year we almost liberated ourselves from abject poverty. All my children who had dropped out of school went back while they continued to join me at the farm after school hours.”

Unfortunately, the gains recorded by Binta has been reversed as a result of the COVID-19 lockdown and closure of markets as many women farmers now tell tales of woes. According the Binta, the pandemic has drawn her family back to the brink of poverty.

“My farming business has suffered a great setback. See my rice farm and you can understand that the crop did not get the required fertilizer and no proper management because the market where we buy the inputs has been closed while the few shops that remain open sell at a high rate.

“Transport was also high due to the lockdown, the price of our farm produce fell; these made it very difficult for small-scale women farmers to make it,” she lamented.

Elsewhere in Guri, Kirikasamma, Auyo and Kaugama, all in Jigawa North East senatorial district, small-holder women farmers like Hajiya Fatima Dahir Auyo are lamenting the massive destruction of their farms by Fulani herdsmen.

Speaking to Sunday Tribune, Hajiya Fatima said, “we are battling with Fulani herdsmen to protect our farm produce and allow them to mature and be harvested. We have been thrown into the most difficult and worst situation of the COVID-19 pandemic which stopped us from going to the farm. It was a good opportunity for the Fulani herdsmen to graze everywhere, including the farmlands.

“As women, we pay men to do a lot of the farm work as we cannot do it by ourselves. Coronavirus has increased the price of everything due to the shortage of manpower caused by the lockdown and movement restrictions.

“We have never benefited anything from any government, be it state or federal in farming business. Several times we were asked to form associations, register and apply for support from government but nothing comes out of that.

“We are members of Rice Farmers Association of Nigeria (RIFAN) and many other farmers’ associations but men have been benefiting most from any support that comes. We the women farmers are never considered.

“We even complained to the state’s commissioner for agriculture during the Anchor Borrowers Scheme by the administration of Governor Muhammadu Badaru Abubakar. The commissioner promised us special attention but it is yet to be fulfilled. We are calling on all relevant authorities to please consider women. The bias is too much.”

In an attempt to help women farmers not only in Jigawa State but the country at large, the Federal Government introduced series of financial aids like TraderMoni, MarketMoni and FarmerMoni all with three-month breather before starting to pay back.

Being women and mostly the breadwinners of their families, women farmers would were also to be beneficiaries of food distribution to households as well as the Conditional Cash Transfer to the additional one million households ordered by President Muhammadu Buhari to be included in the National Social Register.

However, all these appear to be only on paper as Jigawa women farmers say that they have not received support from any of these schemes.

In an interview with the Jigawa State chairperson of the Small Scale Women Farmers Organization of Nigerian (SWOFON), Hajiya Hadiza Abdussalam Giwa, she lamented that, the situation is devastating as many of her members are in critical situations with regards to their farming business.

Hajiya Giwa said “The closure of markets and restriction of movement due to the coronavirus pandemic has made it very difficult for women farmers to source animal feeds and other materials needed for dry seasons farming”, adding that “the capital used by members is like a revolving fund. During dry season, they sell their farm produce to venture into animal or poultry production.

“For those in dry season crop farming, they also had similar experience as the pandemic left them with no market to take their farm produce to for sale.

“The prices of farm inputs such as fertilisers, herbicides and other farm inputs, including labour have increased. Women have to sell so much to buy so little and this has made farming very difficult for them. We are scared and losing hope of getting any bumper harvest this year.

“Our small-holder women farmers need serious support and intervention for them to survive and remain in the farming business.”

Another group of women farmers in Dutse Local Government Area of the state also narrated their ordeal to Sunday Tribune.

Speaking on behalf of the group, Malama Halims Musa Kudai, called on the federal and state governments to help women farmers with capital and modern equipment to improve their farming business.

The women farmers coordinator in Birninkudu Local Government Area of the state, Hajiya Hauwa Akawu Rijiya Bakwai, while speaking said, “the situation we found ourselves under the lockdown is very worrisome because most of my members have eaten all their capital while sitting at home under lockdown, adding that “Many of the women used their farming capital to complement the effort of our husbands to feed the family as children are at home because schools are closed.

“Now, already rainy season farming has started and we’ve eaten our capital; we have little or no money to do clearance and cultivation, buy improved seedlings and pay for labour. These are our main challenge.

“We need capital to continue with our farming either in form of grant, soft loan, intervention or any form of assistance that can enable us to remain in the system, please and please help,” she lamented.

On her part, Malama Hadiza Muhammed Kiyawa who rears a special breed of goats that could produce three to four kids per delivery, along with crop production, lamented that the coronavirus pandemic has not only been devastating on human beings but also on animals, because there is currently an acute scarcity animal feeds which has affected their growth and productivity.

“Many ended up with miscarriages due to insufficient food. I lost a number of my goats while some were sold at giveaway prices as I had no money to buy their feeds.

“I need assistance to keep up the business and also to have some capital to go for rainy season farming as it has already started in some other places.”