‘Life has been terrible’: Another batch of NDDC scholars protest non-payment of scholarship grant in London 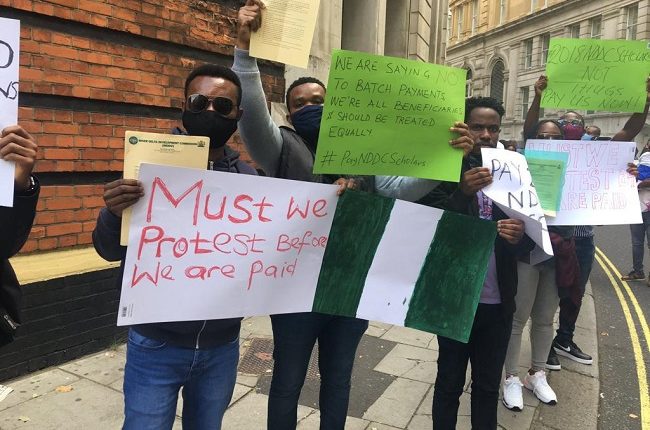 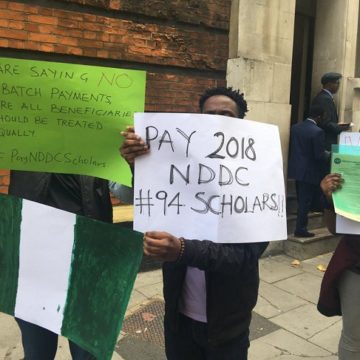 The scholars who carried placards with inscriptions like: ‘Must we protest before we are paid’, ‘we are saying to batch payment, we are all beneficiaries and should be treated equally’, were about 25.

One of the protesters who exclusively spoke to Tribune Online from on telephone, who pleaded anonymity, described their predicament as terrible, saying the essence of the protest is to “let the President know that his orders have not been obeyed.”

“We want the public to know that the 2018 awardees have not been paid… it has been really terrible.”

In reaction to the planned protest, NDDC had on September 11 released a statement signed by Charles Odili, its Director of Corporate Affairs, describing the protestors as “hirelings most of whom are masquerading as the Commission’s scholars, over non-payment of the scholarship fund.

“This is part of an ongoing campaign, orchestrated by powerful individuals who are part of the systemic corruption uncovered by the Interim Management Committee, IMC, in the Commission’s administration of the Foreign Postgraduate Scholarship.”

In reaction to NDDC’s stance, the students released a statement describing the agency’s position as “manifest error.”

They said: “It is common knowledge that in the past ten years, the NDDC awards scholarships to 200 indigenes of the Niger Delta states per year to undertake masters or doctorate degrees.

As a result of the above, it meant that there were about 316 scholars whose tuition fees and upkeep stipends were unpaid. The verified details of all these over 316 scholars are all available on the NDDC scholarship portal accessible by the NDDC and its management. The annual value of the scholarship award is thirty thousand United States Dollars to cover tuition and upkeep.

“About 3 weeks ago, the NDDC by itself changed the Presidential Directive by selectively paying only the outstanding 2016 PhDs and some of the 2019 Scholars, leaving out all outstanding payments for 2018 Scholarship awardees who have been owed for two years since conferment of the scholarship awards.

“In other words, the NDDC selectively handpicked those it paid without any defined criteria and is withholding the fees, grants, and upkeep of 2018 scholars for no justifiable reason whatsoever.

“Therefore, it is not true that NDDC has paid all its scholars because, as of date, the NDDC has not made payments to any of the outstanding scholars from the 2018 scholarship cohort amongst which are masters and PhD Scholars.”

Recall that the commission has been in the eye of the storm owing to alleged misappropriation of funds running into several billions of Naira.

Another batch of NDDC scholars protest

Another batch of NDDC scholars protest