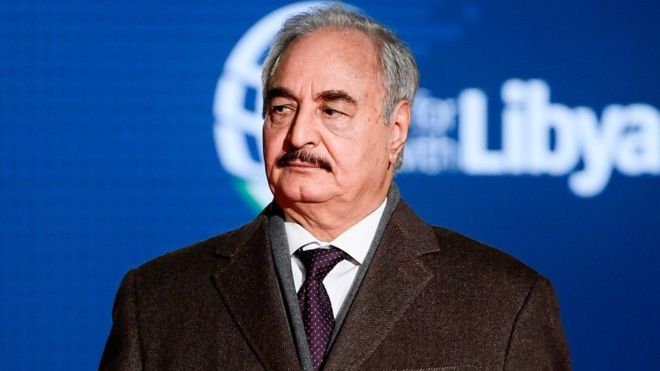 At least 42 people have died in an airstrike in south-western Libya carried out by the forces of rebel General Khalifa Haftar, local officials say.

The victims were attending a wedding in the town of Murzuq, some reports say.

Gen Haftar’s forces – which are based in eastern Libya – say they targeted the town late on Sunday but denied targeting civilians.

The country has been torn by conflict since the fall of long-time leader Muammar Gaddafi in 2011.

Months of fighting between the UN-backed Government of National Accord (GNA) and Mr. Haftar’s forces has claimed more than 1,000 lives since April, according to the World Health Organization (WHO).

Pro-Haftar media outlets said they were attacking Chadian mercenaries, which is how they refer to the Tebu ethnic group which opposes Gen Haftar.

His forces seized Murzuq earlier this year as part of an offensive to take control of the oil-producing south – but they later withdrew.

This is under the leadership of Prime Minister Fayez Sarraj. He arrived in Tripoli in March 2016, four months after a UN-brokered deal to form a unity government, to set up his administration.

Over the last three years, he has worked to gain the support of the various militias and politicians, but he has little real power over the whole country or the forces ostensibly under his control.

Tobruk administration includes the parliament elected in 2014 after disputed elections
When those who held power in Tripoli refused to give it up in 2014, the newly elected MPs moved to the port of Tobruk, 1,000km (600 miles) away, along with the old government.

In 2015 some of these MPs backed the UN deal for a unity government, but the parliament has since refused to recognise it and has been blocking efforts to organise fresh elections because it wants Gen Haftar, who leads a powerful force called the Libyan National Army (LNA), to be guaranteed a senior role in any new set-up.