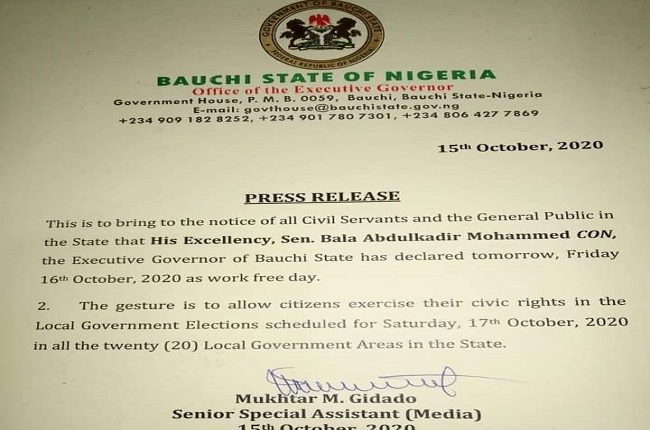 Bauchi State Government has declared Friday, 16th October 2020 as a public holiday for all its civil servants.

The holiday according to a press release by the Senior Special Assistant on Media to the Governor, Muktar Gidado, copies of which were made available to newsmen late Thursday night is to enable them to travel to their various places of voting.

The release further contained that all those registered as voters will be able to go to discharge their civic responsibility calling on them to use the opportunity to move before Saturday when there will be restrictions of movement.

Meanwhile, Bauchi State Police Command has assured people of the state that it has put in place adequate security measures that will provide a level playing ground for all the political parties and electorates towards a peaceful election across the twenty (20) Local Government Areas in the state.

Briefing journalists ahead of the Saturday election, the Command, through the Commissioner, Lawan Tanko Jimeta called on the members of the public to come out and cast their votes on the LGC election day without fear of intimidation from any person or group of persons.

Tanko Jimeta added that the police personnel and other sister security agencies deployed will be all out to man every polling units and to deal with any miscreant, political thugs and other disgruntled elements that may attempt to foment trouble before, during and after the election.

In line with the elections rules of engagement in the state and for the purpose of smooth conduct of the election, the command has placed protocols including total restriction of movement of persons and vehicles between the midnight hour of Friday 16th October 2020 to 2:00 pm of Saturday 17th October 2020, except those on essential duties who must carry their valid identification card.

All personalities are barred from going to polling units with their security details on the LGC election day while all parties to the elections are to be cautious with all COVID-19 protocols in effect.

While reassuring of the command’s commitment of providing a level playing ground to all political parties, the CP sought for the support of traditional rulers, religious leaders, youth leaders, parents and guardians to prevail on their subjects not to allow themselves to be used in causing a disturbance before, during and after the LGC election as anybody arrested in the act will face the full wrath of the law.