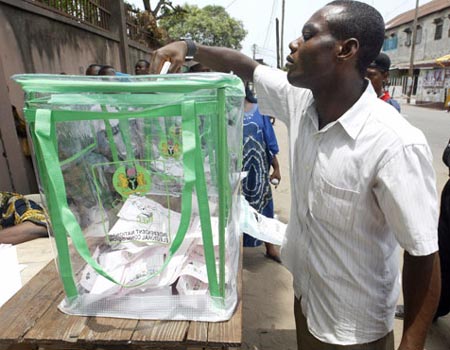 Lagos State chapter of National Conscience Party (NCP) has threatened to drag the State Independent Electoral Commission (LASIEC) to court over refusal to reverse itself on charges it levied on candidates seeking chairmanship and councillorship offices in the July 22, 2017 local government poll.

The party gave this threat in a statement signed by its General Secretary, Yusuff Michael Omuuya and Deputy Publicity and publication Director, Nurudeen AbdulGaniyu, copy of which was made available to newsmen in Lagos at the weekend following the conclusion of primaries that produced candidates of the party for the local government election.

NCP, while recalling that the court judgment which disallowed the Independent National Electoral Commission (INEC) from placing any administrative fees or charges on candidates was subsisting, contended that the refusal of LASIEC “to expunge its illegal administrative fees/charges and other obnoxious/unconstitutional provisions, being set out as parts of the qualifications imposed on candidates for the 22nd July, 2017 LGA/LCDA election in Lagos State is a ploy to or an indication that the commission had rigged the election in favour of the ruling All Progressives Congress (APC) and a coup d’état against the rule of law and a process for genuine democratic government at the grassroots level.”

“It is important to inform and remind the candidates, political parties and the general public that the judgment of the Federal High Court, Abuja, as obtained in 2002 by NCP and others on similar subject matters is still subsisting in law,” the party added.

NCP lamented that despite assurances given by the LASIEC Chairman, Ayotunde Phillips that she was going to obey the said court judgment, based on a dialogue between her and the party at a meeting, saying that it found it appalling, that LASIEC had not, till date, honoured the agreement made at the stakeholders’ meeting.

The party said LASIEC’s refusal to obey court order, aimed at denying individuals their civic liberty to aspire to political offices of their choice in the state, must be resisted by all and sundry, declaring that the said court judgment delivered by a Federal High Court in Abuja in 2002 was in the public arena.

“We call on all stakeholders, including the civil and human rights organisations, pro-democracy groups, Labour movement, etc. to prevail on LASIEC to help building this democracy, and prevent any attempt pursuant to scuttling of the efforts and aspirations of those that aspire to various political offices in Lagos State,” NCP said.

US to partner with Nigeria on preservation of artefacts

Tinubu, most progressive Governor of the 1999 Class ― Sen Nnamani