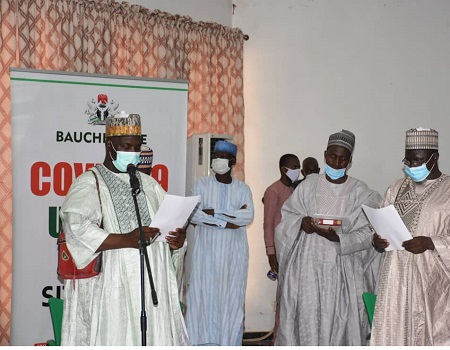 It has been declared that the Caretaker Committee for local government administration is unconstitutional and undemocratic but a child of necessity.

The declaration was made by the Bauchi State Governor, Sen Bala Mohammed Abdulkadir on Sunday while swearing-in 4 Caretaker Committee Chairmen reiterating that the planned local government councils election will still hold in the state before the end of 2020.

He explained that “today we are swearing you in as Caretaker Chairmen because of the situation we found ourselves in due to the COVID-19 pandemic. Let me reassure that as soon as possible we will go ahead with the process of conducting the councils’ elections.”

ALSO READ: No going back on protest against extra-judicial killings in Ogun ― NANS

The Governor reminded the Caretaker Chairmen of the circumstances that led to their selection saying,” you were selected to replace some who resigned due to personal reasons as well as those who were found wanting and were removed from office.”

He warned, “all of them are close to me but we have to act according to the laws. Governance is not about Bala Mohammed, it is about doing the right thing as enshrined in the local government administration enabling law”.

Bala Mohammed further warned the Caretaker Chairmen to ensure that they work with the stakeholders in their respective areas in order to take development to the grassroots stressing that laxity and other forms of indolence will not be tolerated.

He further directed them to continue with sensitization on the preventive protocol of COVID-19 pandemic saying, “I have released money for you to produce face masks which will be distributed to the people. Ensure that you engaged local tailors in your respective areas so that it will serve as a source of income for them”.

He also used the medium to thank the State House of Assembly for always acting speedily to communication from the Executive irrespective of the political party differences saying it has demonstrated that the state is more important than any individual.

Those sworn were for Darazo, Kirfi, Ningi and Tafawa Balewa LGAs.