Letugbene: Military Operatives do not carry out reprisal attack ―JTF 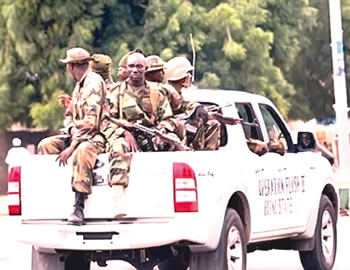 SEQUEL to the accusation by some Ijaw groups that military action to fish out the suspected gunmen that killed 3 soldiers at Tunu river in Letugbene community in Ekeremor LGA was a reprisal inflicted on innocent people, the Joint Task Force Operation Delta Safe (OPDS) has said that the military did not carry our reprisal as alleged, that their assignment is to keep peace on the waterways and in the region.

This is contained in a statement signed by the Coordinator of the Joint Media Campaign Centre, Major Ibrahim Abdullahi, made available to Nigerian Tribune in Yenagoa.

He noted that the statement was necessitated to put to rest exaggerated speculations on an incident, stressing that the OPDS don’t embark on reprisal attack, just as it noted that the incident happened on the Monday around 2000hrs (8 pm) near Letugbene community where unknown militants opened fire on our men.

Though, the Ijaw Peoples Development Initiative (IPDI) led by Comrade Austin Ozobo had complained that the action of the military raised palpable fear as they shot sporadically, many scampered for safety and ran into the bush, while some women and children are still missing in the bush.

Ozobo also regretted that the soldiers in error burnt the vice chairman Akpozenebrapagha Namalate house and noted that action which caused pain to innocent people show they were unprofessional, as such would not happen in advance countries.

The National President of IPDI, who condemned the killing of the soldiers, averred that in the north where mayhem happened daily yet no structure is burnt down, even as he called on the military to exercise restraint and separate innocent persons from criminals while their operation last in the community.

But the Joint Task Force (OPDS) averred that the military is trained on professionalism and it would not hunt innocent persons, or make them suffer because of miscreants, stressing that during the firefight, one gallant soldier and a civilian staff attached to the military houseboat paid the supreme price for defending fatherland as against reports of four (4) Soldiers killed.

Continuing, the statement reads “a rescue team supported by gunboats was immediately dispatched to the area and they were able to locate and support two other soldiers who engaged the militants.

Abdullahi averred that the current operations in the creeks and rivulets around the general area are surgical operations designed to fish out the perpetrators of that dastardly act some of whom fled into neighbouring communities.

He stated emphatically that the job of the JTF remains to keep the peace on the waterways, creeks and the Niger Delta in general. Operation Delta Safe and indeed the Nigerian Military do not carry out reprisal attacks on innocent citizens as alleged in some quarters.

The statement also advised the public especially those residents in areas where operations are being conducted to go about their normal lawful duties at this time of Sallah break and celebration.

Military eliminates over 36 terrorists, several others in air raids in North-East…