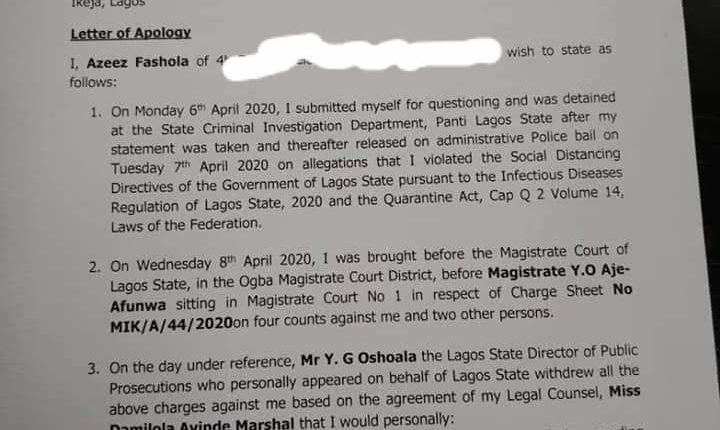 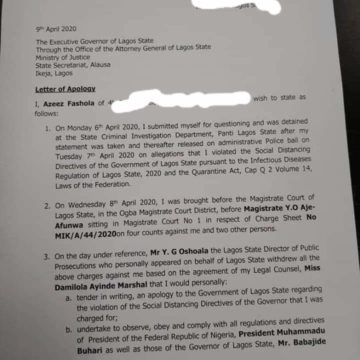 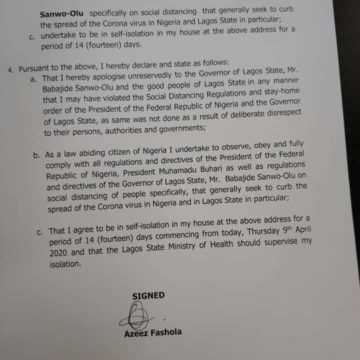 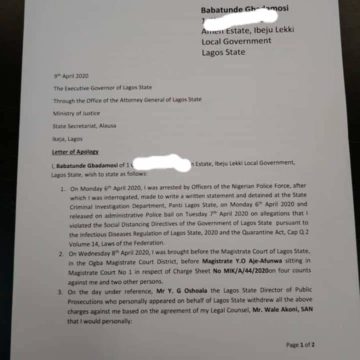 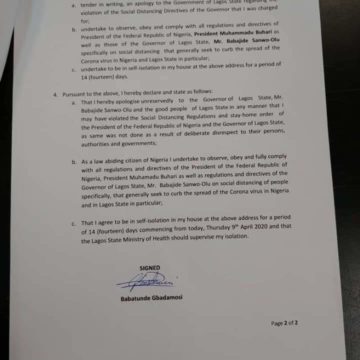 The Lagos State Ministry of Justice had, on April 8, filed charges at the Magistrates’ Court sitting at Ogba against the defendants for attending a birthday party organised by celebrity, Mrs. Funke Akindele-Bello for her husband, on April 4.

Speaking on the case, the Director of Public Prosecution (DPP), Yhaqub Oshoala, said that in view of the remorse shown by the defendants, the state agreed to withdraw the charges on the condition that the accused fulfill certain conditions.

However, the letters of apology by the two have been written and signed by them which they delivered to the state government on Friday.

Easter: Social Restriction Orders Still In Force ― IGP
The Inspector-General of Police, Mohammed Abubakar Adamu, on Thursday, declared that the social restriction order of the Federal Government to curtail the further spread of the deadly coronavirus pandemic in the country was still in force despite the Easter celebration festival by the Christian community… Read full story

COVID-19: I Saw Hell In Isolation ― Bauchi Gov, Bala Mohammed
After testing positive to COVID-19 infection and receiving treatment for about three weeks, Bauchi State governor, Sen Bala Mohammed Abdulkadir, has been discharged and given a clean bill of health by the Nigeria Center for Disease Control (NCDC)…. Read full story

COVID-19: Ensure Transparency In Management Of Fund, Lawan Tells PTF
President of the Senate, Ahmad Lawan, has advised the Presidential Task Force (PTF) on COVID-19 led by Secretary to the Government of the Federation, Boss Mustapha to ensure judicious use of fund dedicated to combat the pandemic… Read full story

Akeredolu’s approval to Ondo CAN to celebrate Easter in churches a blackmail, says Afenifere

We’ve referred allegations against Fayemi, myself by Ogudu, others to police,…