Let’s put the past behind us, Aregbesola tells Akeredolu 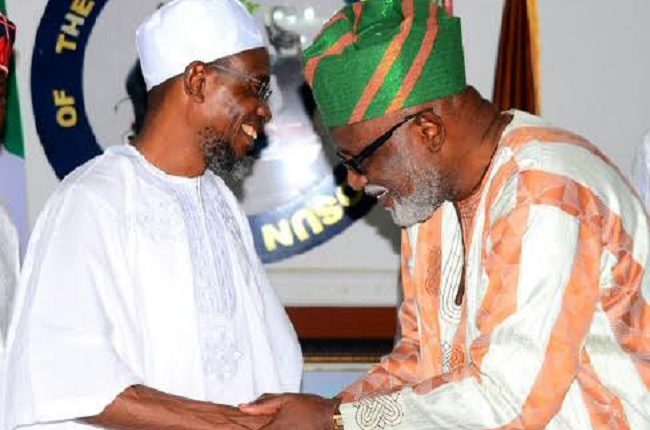 Former Governor of Osun State and the Minister of Interior, Mr Rauf Aregbesola, on Monday, urged Governor Rotimi Akeredolu of Ondo State to put behind the political differences between them.

Aregbesola who stated this in Akure, Ondo state capital, during the commissioning of newly acquired fire fighting vehicles for the state, said though they have their differences politically, but said “the past has now remained in the pas.t”

The Minister who assured Akeredolu that irrespective of their differences in the past Akeredolu remains his personal friend, noting that the Ondo State governor was his personal lawyer before his emergence as governor of Osun State.

He said apart from this, Ondo State has been his home having spent the first eighteen years of his life in the sunshine state.

Aregbesola and Akeredolu had a running battle during the 2016 governorship election when the minister of Interior allegedly supported and financed Olusola Oke of the Alliance for Democracy against Akeredolu who later won the election.

The Minister said his personal presence at the commissioning of was to further convince Akeredolu that whatever that has happened between them has been buried in the past.

Commissioning the fire fighting vehicles, Aregbesola disclosed that the Federal Government had been working towards the upgrading of Federal Fire Service for optimum performance in fire fighting.

According to him, no fewer than 2000 fire incidents had occurred across the country in 2020, while the federal fire service had been able to save 724 lives and assets worth over N1trillion from being destroyed by fire.\

The Minister appealed to the people to be careful of fire while handling items, particularly electrical appliances during the ongoing dry season and said, ” We are working towards upgrading the fire fighting services but our people must be careful and preventive against fire incidents. Because this is the most dangerous part of the year.”

Aregbesola assured that another fire fighting truck would be donated to the state before the end of the first quarter of 2021, as a result of the collaboration between the state and his ministry.

In his remarks, the state governor, Rotimi Akeredolu, said his administration had been working towards ensuring that all the fire stations across the state are put in good condition.

He said apart from this, the state government has been designing new moves towards motivating the fire officials in the state

The governor said, “We are working hard and putting the strategy in place to ensure all the fire stations are put in good shape within the shortest period of time to respond to emergencies as and when necessary.

“To achieve this, it is our plan to acquire new Rapid Intervention Vehicles that convert water to vapour and can manoeuvre through narrow lanes and rough terrains for use by our firefighters.”