Lent: Its significance, impact by clerics

The Lenten period is here, a spiritual event that unifies virtually all Christians across the world as they observe the fasting for 40 days just as Jesus Christ did during his earthly ministry. SEYI SOKOYA chronicles the significance of the Holy season as well as the views of church leaders about the season. 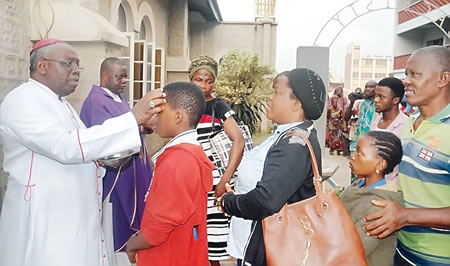 Last Wednesday marked the commencement of the Lenten period. Popularly known as “Ash Wednesday” the Lenten period is expected to culminate in the Passion Week and finally Easter day which will commemorate the resurrection of Jesus Christ on April 12.

According to history, the period is a time set aside to spiritually prepare Christians and to offer believers the opportunity to come to terms with the personality and in-depth knowledge of Jesus Christ and what he stood for.

One of the significance of Lent is that it is a season that separates Christians from the world. It is also believed that those who journey through the Lenten season will enter the Easter season with an increased appreciation of who God is and the joy of resurrection as well as the promises of eternity.

From all indications, this year’s Lenten period is significant as it would serve as a grand opportunity for all Christians, especially in Nigeria, to collectively seek the face of God.

Following this development, Christian bodies and church leaders in the country have seized the opportunity to raise hopes and charge the faithful at large to make maximum use of the season.

Head of the Catholic Church, Pope Francis, in his Lenten message, charged the faithful to embrace the paschal mystery as the basis for conversion.

“I want the faithful to fix their eyes on the crucified Lord and allow ourselves to be saved over and over again. Jesus’ Pasch is not a past event; rather, through the power of the Holy Spirit it is ever present, enabling us to see and touch with faith the flesh of Christ in those who suffer,” he added.

Speaking on the importance of prayer, the Holy Father emphasised that prayers during Lent, is a means of responding to God’s love, “which always precedes and sustains us.” We are also called to hear and respond to the Word of Jesus, in order to experience “the mercy He freely gives us”.

He also seized the moment to call on Nigerians forgive one another and pray more for a greater realisation “that our lives belong not to us, but to God.”

According to the Catholic Bishops’ Conference of Nigeria, it is a welcome development that Christians all over the world have begun a spiritual journey of repentance marked by prayer, penance, alms giving and other forms of charitable works, just as the body also challenged all “Christians to shine like light in the darkness of our country wherever they are engaged, to be different where greed, graft, discrimination and insensitivity reign.”

In a statement signed by the president of the conference, Most Reverend Augustine Akubeze and its secretary, Most Reverend Camillus Umoh, which was made available to Tribune Church, “we do this in order to participate more intimately in the suffering of our Lord Jesus Christ, in preparation of or the celebration of the solemn feast of his Resurrection at Easter.”

The conference, however, called on all Catholics in Nigeria as well as other Christians and persons of goodwill to unite in prayer and penance for peace and security in our country.

The statement also stated that: “The level of insecurity in Nigeria today is such that whether at home or on the road, most Nigerians in all the parts of the country, live in fear. The repeated barbaric executions of Christians by the Boko Haram insurgents and the incessant cases of kidnapping for ransom linked to the same group and other terrorists have traumatised many citizens.

“That the perpetrators of these heinous crimes make public shows of them on social media and Nigerians do not hear of any arrests or prosecution of the criminals raises very serious questions about the ability and willingness of the government to protect the lives of the ordinary Nigerians. To make matters worse, many communities are constantly threatened, harassed and sometimes even sacked by herdsmen, as they seek to forcefully take over more territories for the purpose of grazing their cattle.

“Aware of our moral responsibility, may we, once again, remind all the arms of government in Nigeria and all whose responsibility it is to protect Nigerians that without security there can be no peace and without peace that can be no development or national growth. We therefore appeal to the Government to immediately put a stop to this unprecedented wave of violence and brutality aimed particularly at Christians. We also call for the arrest and prosecution of all those behind these senseless killings that sow the dangerous seeds of hate and distrust among the various segments of the Nigerian society.

“We are sad. We are in sorrow and grief. But we are confident that the light of Christ, which shines in our hearts, will brighten the dark corners of our Nigerian society. As a mark of mourning for all our brothers and sisters who have been victims of the most recent wave of violence against Christians, we are all dressed in black today and offer our prayers and penance for their repose. We invite the universal Church and all Christians to join us in prayers for our dead brothers and sisters and for peace and security in Nigeria. We equally appeal to the international community to come to the aid of the Nigerian government in the fight against these daredevil terrorists, who want to destabilize our country. The consequences, should they succeed, will be grave not only for the West African sub-region but also for Africa as a whole,” if stated.

In his Lenten message, Catholic Bishop of Oyo diocese, Bishop Emmanuel Badejo, shed more light on its significance, saying that it is a period in which all Christians are enjoined to fast, give alms and intensify prayers and the practice of the word of God.

“The purpose of this is fundamentally for personal conversion and the salvation of the individual. It is from there that the individual Christian must transform the society through the love of neighbour, righteous living and a life of holiness. “Be holy for I the Lord your God am holy” (Lev 19:1).

“Lent is a time to combat sin in one’s life and in the society and to resist the temptation of the devil as Jesus Christ himself did (Matthew 4). Sin is at the root of all the evil and vices which we witness in life. Jesus calls all to repent and believe in the good news (Mark 1: 14-15) Lent is a period in which we must fix our gaze and focus our mind on Jesus so that all the characteristics found in him may also be found in us.  Lent is a period for reconciliation with our neighbours through forgiveness of one another’s sins and with God through confession of our sins and changing our ways. (Joel 2, Daniel 9),” he added.

Badejo, however, noted that this year’s Lent should reflect the solidarity and companionship with those who are oppressed, especially Christians who are persecuted for their faith, while calling on the authorities to guarantee freedom of religion and security of life and property.

“Ours is the prayer of distress (Psalm 142, Daniel 9) for Leah Sharibu and others in captivity, for Reverened Lawan Andimi, the murdered chairman of the Christian Association of Nigeria of a Local Government in Adamawa state, for Michael Nnadi, a seminarian and the catholic mother of a family slaughtered by Boko Haram. We pray for the families of our dead soldiers, policemen and others who have been slaughtered. We call on the government and those in authority to repent, turn a new leaf and help those who have been thus bereaved and carry out their duties with the fear of God so that the Lenten period may leave a meaningful mark on all. Then God will turn our fortunes around and turn this “desert” into a land flowing with milk and honey for all (Isaiah 58),” he added.

Between man and machine (II)