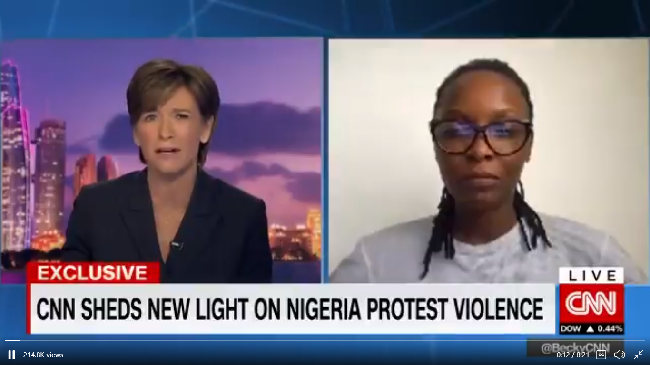 Cable News Network (CNN) has reacted to the Federal Government’s stance that it should be sanctioned over its report on the October 20 shooting incident at the Lekki Toll Gate, saying it stands by its report.

Addressing the press at the fortified Army Resource Center, Mambilla Barracks, Abuja, Minister of Information and Culture, Alhaji Lai Mohammed on Thursday described as jaundiced the CNN report that the military shot at peaceful protesters.

“CNN relied heavily on unverified and possibly-doctored videos, as well as information sourced from questionable sources, to reach its conclusion.

“This should earn CNN a serious sanction for irresponsible reporting,” Lai Mohammed said.

However, in a swift reaction on Thursday, a company spokesperson said CNN stands by its investigation.

“Our reporting was carefully and meticulously researched, and we stand by it,” the spokesperson said via email.

According to CNN, the report was based on testimony from dozens of witnesses, and photos and video obtained and geolocated by CNN.

It painted a picture of how members of the Nigerian army and the police shot at the crowd, killing at least one person and wounding dozens more.

CNN said it verified photos and videos acquired from multiple eyewitnesses and protesters using timestamps and other data from the video files.

Video footage shows soldiers who appear to be shooting in the direction of protesters. And accounts from eyewitnesses established that after the army withdrew, a second round of shooting happened later in the evening.

Prior to publishing the report, CNN said it tried multiple times to elicit comment from the Nigerian army and police.

A Lagos State police spokesman declined to comment because of an ongoing investigation, while a statement from the Lagos State government said that there would be no comment while a judicial tribunal was underway.

CNN also said it included comments from army representative Brigadier Ahmed Taiwo, testifying before the tribunal. He denied that soldiers would shoot at Nigerian citizens.

According to CNN, “the investigation was broadcast and published on Wednesday and cast doubt on Nigerian authorities’ shifting and changing statements over what happened at the protest at the Lekki toll gate in Lagos.

“The CNN report included evidence that bullet casings from the scene matched those used by the Nigerian army when shooting live rounds, according to current and former Nigerian military officials.

“Two ballistics experts also confirmed with CNN that the shape of the bullet casings indicate they used live rounds, which contradicts the army’s claim they fired blanks.”