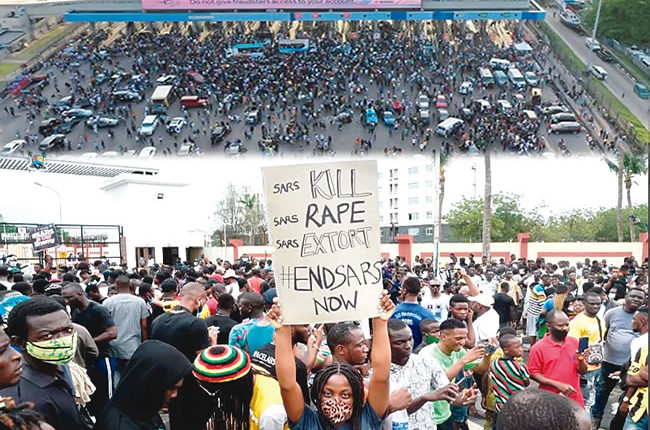 Ministers from the south-west who were directed to go home and sort out the #EndSARS agitation, have presented their report to the Federal Executive Council (FEC), recommending a thorough investigation into the Lekki Toll Plaza shooting incident particularly the role of the military.

“We also urged that the federal government should undertake a thorough investigation into what happened in the Lekki Toll Plaza, particularly the role of the military and ensure that the outcome is made public with a view to achieving closure on the matter,” the Minister of Works and Housing, Babatunde Fashola, who briefed State House correspondents in Abuja after the meeting on Wednesday, said.

Apart from Fashola, the ministers who briefed the council at its Wednesday’s meeting are Otunba Niyi Adebayo representing Ekiti, Rauf Aregbesola representing Osun, Sunday Dare representing Oyo, Olamilekan Adegbite representing Ogun, Olorunimbe Memora Lagos and Tayo Aladura representing Ondo, was in regards to how we executed the directive on the October 21st to ministers, for us to visit our state’s governors in our states.

Fashola disclosed that the ministers also recommended that the federal government should assist businesses affected by arson and looting in Lagos and other parts of the country through the Central Bank and the National Economic Council (NEC).

He said: “The highlight of the brief was to make recommendations to the federal government to support Lagos State to restore damaged facilities especially those related to the maintenance of law and order and the administration of justice such as police, court buildings and forensic laboratory.

“To also consider supporting the Lagos High Court Judges either with the provision of some office accommodation as a temporary relocation when that request is made. Of course, it was hinted during the visit.

“To also urged the federal government to consider short to medium term support to small and medium businesses who were affected by the looting and arson which took place in Lagos and other parts of the country, to see if something can be done through the Central Bank Intervention Mechanism under the COVID-19 funding or any other related funding mechanism.

“And to also ensure that whatever is approved should also involve the National Economic Council, the platform on which state governors meet, so that other states across the country who were also affected, businesses were damaged can benefit in addition to Lagos residence who may so be supported.”

The ministers also recommended that the federal government re-mobilise critical organs and agencies such as National Orientation Agency and formal educational institutions focus on ethical re-orientation, inculcation of family values into the school curriculum.

Similarly, they recommended that the Federal Government should actively seek and support the process of justice for all by ensuring that any of those apprehended and identified to be involved in the perpetration of this carnage be speedily brought to justice and fairly tried.

Fashola added: “We also urged the Federal Government to implement the maintenance of facility management policy approved by FEC in 2019 for Federal Ministries, Department and Agencies and to encourage states to do the same.

“We do this because we see this as a usual vehicle to help absorb and create immediate employment of skilled, semi-skilled and unskilled Labour, in order to address huge unemployment and poverty-related part of the problem.

“This is important because people have skills but we need to provide the economic environment in which those skills can become income-earning and self-rewarding.

“We urged the government to also restore confidence in the police and their morale among the officers of men and women and to improve their welfare while tracking the ongoing reforms being undertaken in the police force.

“We also urged the Federal Government to consider through the federal ministry of health issues of substance abuse amongst the populace and propose solutions because this potentially affects mental health.

“We made this recommendation mindful of the global opium and substance abuse crisis and the impact on our country as well. We think this is a matter that requires some attention and focus.”

The works minister said in the course of their intervention, they met with governors, saying: “After meeting with the governors, the position of the governors was that Lagos being the epicentre, a commercial and strategic city-state in the south-west and the country is where we should all go. That was what informed our visit to Lagos.

“So, I just briefed council about the reports that were presented to us by the Lagos state government when we visited.

“So, we presented the documentary evidence presented to us by the Government of Lagos State which was shown to the Council.

“Then we visited a few palaces – the Lagos High Court led by the governor of Lagos, Babajide Sanwo-Olu, we visited NPA, Forensic Lab and the Lekki Toll Plaza as well and as you all know, we found some items which we handed over to the state government at the site. These were the highlights of the report that we presented.

“The minister of youth and sports also visited the Lagos Island Hospital to empathize with seven persons who were reported to have sustained various degree of injuries in the ward and emergency unit. He also visited media houses to commiserate with them in the destruction of property.”

President Muhammadu Buhari had dispatched ministers to their various states to interface with youth in the wake of the #EndSARS protests that led to the death of peaceful protesters at the Lekki Toll Plaza.

The shooting incident at the plaza was followed by nationwide looting and arson.

Restoration of public confidence in the police: A herculean task (3)