RazzmatazzEntertainment
By Segun Adebayo and Kola Muhammed On Oct 25, 2020 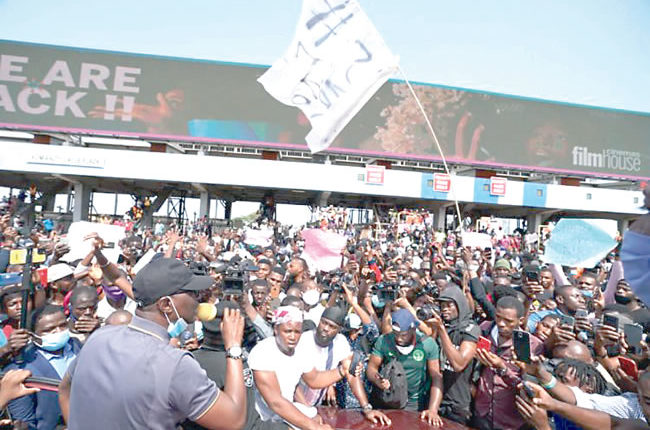 With the gradual ease of #EndSARS protests that have rocked the country in the last two weeks, celebrities and actors who have been part of the struggle tell tales of their disappointment in the Nigerian government amid growing concerns about its attitude towards arresting the systemic and infrastructural decline in the polity. Segun Adebayo and Kola Muhammed take a look at the issues raised by the protesters and why Nigerian entertainers weep.

This year has been everything but a good year for many a Nigerian celebrity. With the grinding to a halt of shows and concerts occasioned by the coronavirus pandemic earlier this year, it was not too long for many of them to realise that the year would be an unusual one. Without any shadow of doubt, celebrities live on shows, public appearances and endorsements – with these being threatened, many of them had to devise new sources of survival different from their regular means of livelihood.

At first, some of them thought the pandemic was going to be for a short while, but as borders were shut and the airspace locked, it became obvious that they were in it for the long haul. With no shows within and outside the country for the music lovers; no movie location for the thespians and no public appearances for those who eke out a living from being in the faces of the people, it wasn’t long before their finances started growing lean in the face of economic drought.

Soon, the grumbling and lamentation began and it was not surprising to see some of them run into trouble for organising and gracing events which breached COVID-19 protocols.

As soon as the ban on public gathering was lifted, many of them started heaving a sigh of relief and the growing acceptance of online streaming meant that life was getting back to normal for them. No sooner than the ostensible restoration of normalcy, agitations grew louder on social media platforms against the alleged notoriety of security agents and abuse of power.

Many celebrities started using their platforms to lend their voice to what became an all-out protest against police brutality. Some of them intoned their frustration and inhuman treatment at the hands of the Special Anti-Robbery Squad (SARS), a unit in the Nigeria Police Force, as they vehemently campaigned for its disbandment.

From the social media to the streets, campaigns grew louder as more people joined the cause which was started by popular rapper and son of legal luminary, Femi Falana, Falz and Mad over you crooner, Douglas Agu, famously known as Runtown.

And in less than two days, more celebrities and their fans joined the protest which was themed #EndSARS. Gradually, the protests spread across states and it was not long before the attention of governmental authorities was attracted with the demonstrations taken to the Lekki Toll gate plaza where many people spent nights protesting.

Even though SARS was disbanded, the protesters insisted on an extensive reform of the police force, publicising a-5-for-5 agenda that must be met before they could be convinced of leaving the streets.

Foreign celebrities also joined the fray, with the likes of Twitter CEO, Jack Dorsey; music star, Kanye West; rapper and producer, Sean Combs also known as P.Diddy; Rihanna, Beyoncé and Cardi B showing support for the their Nigerian counterparts in the struggle.

Highpoint of the protests was the Lekki shooting incident in which many reported seeing soldiers opening fire on protesters via Dj Switch’s Instagram live and fear gripped the country and observers of the situation beyond the shores.

This drove many to express varying degrees of emotions concerning the shooting incident and the attendant injuries and loss of lives, and the silence and perceived inaction on the part of the government at both state and federal levels.

With the protests now seemed to have been suspended in many states, celebrities have been expressing their displeasure at President Muhammadu Buhari’s reaction to the alleged Lekki massacre, particularly when he did not address it in his national broadcast on Thursday.

I am not afraid for my life – Falz

“I am not afraid for my life because where we are right now, I feel like I can die easily die by anything else anyway. I do not know where to start because we have a non-existent healthcare system for example, we have a seriously high level of poverty, there is unemployment. We are in a critical state because of the level of corruption and mismanagement of funds that we continue to see on a daily basis… So, what kind of life am I living anyway? Why should I be afraid of dying? I am going to die anyway, so what is the point?”

This government is the biggest mistake of our generation – Davido

“I’m so hurt for our generation because this government is the biggest mistake of our generation. We dey disguise dictatorship as democracy. Everybody should get their PVCs ready.”

Our protest against violence was met with more violence – Banky W

“Lagos turned off the lights and removed cameras. Military showed up and opened fire on peaceful protesters. Today, the Army denies it, the governor says it was “forces beyond our direct control”, the IGP and security chiefs still have jobs, and the President is silent. What a disgrace.

My heart is so broken – Simi

“This speech just destabilised me. He didn’t even acknowledge them. Wow. So that’s it then? My heart is so broken. I’m crying. It’s like he just zapped the small hope I was clinging to. All these heroes did not die for nothing. We will prevail. I believe it! We can’t lose hope. Do whatever you need, we can’t give up.

The government continues to use our decency against us – Mr Macaroni

“This is happening because we refused to meet violence with violence. So many times we have maintained peace on the protest grounds and what do we get? More violence! We are decent and the government know that and they continue to use that against us.

“I refuse to lose hope. Nigeria will be better! Well-meaning Nigerian youths, now is the time to come together as one irrespective of tribe and religion and make plans on how to make Nigeria better for all of us”.

This is just the beginning – Wizkid

“This is not about me, you or any individual. This is for us and the next generation to come! This is just the beginning. We won our fight to #EndSARS. Reform the Nigerian Police. End police brutality. We deserve good governance”.

“What do you call a government that can negotiate with terrorists, but cannot negotiate with her youths? They had every chance to negotiate with the youth and better Nigeria for us all. But they chose to open fire on them with live ammunition. Chose to kill them instead. Now it’s mayhem in Nigeria. Are they happy now?”

You can never silence me – Runtown

“No matter how many death threats you send my way, you can never silence me. Our cause is just”.

“Our crime was asking them peacefully to stop killing us! This is the Nigerian government’s response. I am dazed, my heart cannot take this. Nothing about the Lekki massacre or na my ear? Everybody that has a hand in this sacrilege will not know peace”.

I’m not surprised at Buhari’s lack of empathy – Bovi

“Our parents’ generation has never known how to say sorry. So I’m not surprised at Buhari’s lack of empathy for the Lekki victims and survivors”.

I still hear the gunshots ringing in my head – Kate Henshaw

I still hear the gun shots ringing in my head…. Tears flow freely… When you kill everyone who will you rule? Because you rule, not lead… No leader worth his or her salt will do this!

Nigeria has failed me once again – Rema

“They’re killing my brothers and sisters for wanting good governance. I’m heartbroken, Nigeria has failed me once again”.

“Zero empathy from so-called leaders! We are still asking for a better Nigeria, they left us with sorrow, tears, and blood”.

I am traumatised – Burna Boy

“I have not slept since 20/10/2020. I close my eyes and all I see is Lekki toll gate. I’ve seen a lot of violence and death in my life but this is the one that has traumatized me. They removed the CCTV cameras, turned off the lights and they are killing people and taking their bodies. The whole government should step down! I’m in so much pain”.

“Killing civilians to prove your point or ours? Make it make sense! Failed Nigerian government! We will take back our country”.

This is a crime against human rights – Omotola Ekeinde

“While the government said SARS had ended and claimed to understand our agitation, they sent them to rein in the enraged protesters on the streets and started executing them! This is a crime against human rights! You do not shoot someone not pointing a gun at you or running from you”.

It’s clear that we mean nothing to them – Basket Mouth

“It’s clear that we mean nothing to them! The 234 million that Lagos lost to Toll gate can’t buy life”.

For actress, Ada Ameh who lost her daughter days ago, her sorrow was losing a daughter to the cold hands of death and being unable to retrieve the remains. She then called on the government to come to her rescue.

“Good morning Mr President, good morning Sanwo-Olu. Please, I just lost my daughter two days ago, I beg you in the name of God, let me go and bury her. My daughter died in Abuja after surgery. Help me to go and bury my daughter in peace. I am begging. If not, at the end of the day, I will go unclad with a placard in hand to the airport so as to bury my child,” Ameh appealed.

In Sokoto, days of probity, fiscal discipline are here