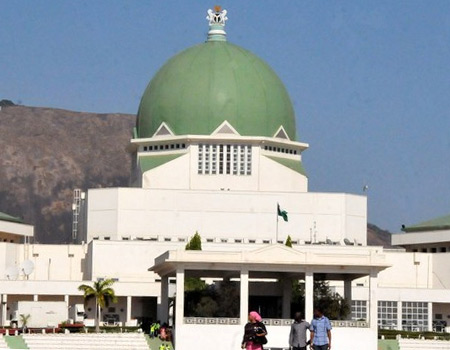 Legislative Aides to the Senators and members of House of Representatives, on Wednesday, staged a peaceful protest at the lobby of the National Assembly chambers in the bid to press home their demands for payment of 2019 outstanding salaries and implementation of the new national minimum wage.

The protest which coincides with the plenary session of both chambers prompted a beef-up of security at the entrances leading into both chambers.

Some of the placards displayed by the protesters under the aegis of ‘Concerned Legislative Aides’ read: “Misappropriation of public funds criminal – FRA 2007”; “End salary arrears debacles; We are Aides, not slaves”; “Stop the impunity in National Assembly”; “CNA is a public servant, he is not above the law”; “It is inexcusable to be owed 2019 salaries in 2021 – Rt. Hon. Speaker.”

The aggrieved protesters who chanted solidarity songs and held both Christian and Muslim prayer sessions and recited the national anthem intermittently vowed to sustain the protest until their demands are met, tasked the Clerk for the National Assembly, Arc. Olatunde Ojo to ensure prompt payment of the salaries and allowances in the bid to ensure industrial harmony.

Recall that the House of Representatives had, on Tuesday, 16th March 2021 passed a resolution to compel management of the National Assembly Service Commission (NASC) to ensure payment of all outstanding salaries and allowances of Legislative Aides for 2019 and 2020 for which adequate budgetary provisions were made and funds released on First Line Charge bases for the payment of salaries and allowances of Distinguished Senators and Honourable Members.

The resolution was passed after the adoption of the Recommendations of the Committee on House Services on the need to investigate the irregularities in the payment of salaries and allowances of Legislative Aides in the 9th Assembly,’ chaired by Hon. Olawale Raji.

“In their submission, they stated that some Legislative Aides who assumed duty with their Principals on 11th June, 2019 were not paid in accordance with their effective assumption of duty date.

“In addition, some of them whose letters were dated between 12th September, 2019 to 31st December, 2019 and who had assumed duty from 11th June 2019 were also denied their arrears.

“The Zonal Leaders averred that their First 28 days was also not paid which is contrary to Chapter 13, Section 01, paragraph 01, of the Public Service Rules, 2008 and therefore appealed to the Committee to direct the Management of the National Assembly Service Commission to act in accordance with the extant Laws and the Public Service Rules.

“Briefing the Committee, Ahmed Amshi, the Chairman National Assembly Service Commission (NASC), stated that letters of appointment were issued to Legislative Aides based on the date their letters of recommendation for appointment signed by their principal were received by the commission.

“However, the payment of their salary is the sole responsibility of the management of the National Assembly. As a solution to address the irregularities noticed in the dates of commencement of payment of salary of Legislative Aides, the Chairman promised the Committee that the Commission will henceforth take steps to harmonize the date of assumption of duty of Distinguished Senators and Honourable Members to tally with that of their Aides.

“Similarly, the then Clerk to the National Assembly, M.A. Sani Omolori appeared in person but sought the leave of the committee not to be present because he was bereaved. The Chairman of the committee granted his request while Mohammed Umar, the Secretary, Human Resources stood in his place. The Secretary, Human Resources informed the Committee on behalf of the Management of the National Assembly that, the Management paid all Legislative Aides based on the dates stated on their respective appointment letters.

“In addition, the first batch of letters of appointment of the Legislative Aides came to National Assembly Management on 26th August 2019, which made it difficult for the Management to pay their salaries and allowances with effect from 11th June 2019,” the report stated.

“Based on the documents submitted to the Committee which included the Payroll of salary structure/scale and record payment of salary and allowances of all the Legislative Aides from June 2019 to May 2020 and the payslips of the Legislative Aides submitted by the Zonal Leaders of NASSLAF, it was evident that not all the legislative aides were paid their salaries and allowances with effect from the date of assumption of duty nor were their arrears paid.

“The National Assembly Service Commission should direct the Management of the National Assembly to pay all the Legislative Aides their allowance for the First 28 days and arrears of unpaid salaries with effect from the date of their assumption of office as confirmed by their Principals i.e: Distinguished Senators and Honourable Members).

“This recommendation is based on the fact that adequate budgetary provisions were made in both 2019 and 2020 and funds released on first-line charge bases for the payment of salaries and allowances of Distinguished Senators and Honourable Members together with their respect Legislative Aides,” he noted.

God is set to end menace of terrorism, killings, IPOB agitation, others in Nigeria ― Movement