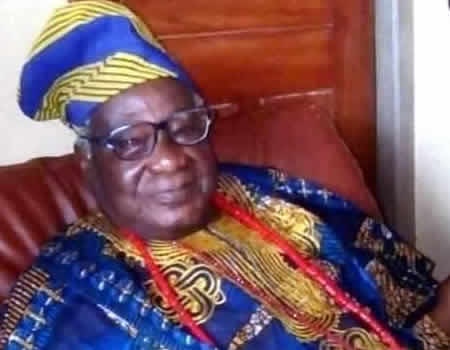 AN author and doyen of Yoruba thrillers, Chief Oladejo Okediji, lived up to his prediction that he may not be around to witness his 90th birthday anniversary as he died some six months to the date in the early hours of Wednesday, in his house situated at Mabolaje area of Oyo Town, Oyo State.

The legendary author, who was until his demise the Otun Baale Apaara of Oyo, was said to have not shown any sign of sickness, while the announcement by one of his children, Goke, turned his house to a mecca of sort as sympathisers kept trooping in to condole with the family.

Born on October 26, 1929, in Oyo, in Ile Otun Baale Apaara, Okediji attended Methodist School, Apaara and was enrolled in January 1935. He completed his primary education at St Andrew’s Primary School in 1943. In 1944, he took entrance examination to Wesley College, Ibadan and later University of Ife (now Obafemi Awolowo University), where he bagged a diploma degree.

Speaking with our correspondent, Dapo Falade, in what is likely to be his last interview with any major national newspaper and published in the Nigerian Tribune on February 4, 2019, the late octogenarian author went down the memory lane as he simply described himself as “a retired school master, a writer, one-time politician.”

Speaking on his growing up years, the late Okediji said: “I was born in Oyo here in Ile Otun Baale Apaara. Incidentally, I am the present Otun Baale Apaara of Oyo. I was born in 1929, I hope. I was baptised in Methodist Church, Apara in 1930. On the certificate, it was written, age: Infant.

“So, I decided to choose a year earlier than that date and that is why I choose 1929 as my date of birth. Something happened in my family: a child was born on October 27, 1929 and I said I must be one day older than that child. That is why I have chosen October 26 and that is the date I use till date. I will be 90 in October this year, if I am still around.

“I went to Methodist School, Apaara. I was enrolled there in 1935, January. I was there until I had read Standard Four which was the highest class in the school at that time. I had to complete my primary education in St Andrew’s Primary School. I passed out in 1943. In those days, when you had finished your primary school, you could be a teacher. So, I was a teacher in 1944. I took entrance examination to Wesley College, Ibadan. I was there from 1945 to 1948.”

As it was common with parents of those days, he said he was born to parents who were farmers and lived far away from the homestead while he was brought up by his paternal grandmother.

“My parents were farmers. They lived in Oyo here and had their farm some 12 miles away where they stayed the whole week and came back at the weekend. Sometimes, they kept two or three weeks away before coming back. I had my father’s mother here in Oyo taking care of me and the siblings…”

On what informed his choice of Yoruba book writing as a profession and if he found it interesting, the late Okediji, in the interview, said: “It was almost automatic for Methodist pupils. I never wrote any application: Immediately after finishing Standard Six, I went to the school manager who was a reverend. He told me, ‘Go to Fiditi’ and that was how I became a teacher.

“I have not had any other job so, I cannot compare. Even when I was briefly in politics as a councillor in Oyo here from 1958 to 1961, in those days, you will still be doing your work, attend council meetings and be paid sitting allowance.

“Even if you are in the House of Assembly or in the House of Representatives, you will still be doing your job, but attending meetings of the legislature. So, I was a teacher all the time and I never had any other job.”

The prolific writer, however, disclosed that he took up the genre of writing in Yoruba Language by mere accident as he said, “In my college days, I love reading literature books, but the books I read in the college library were English books, written by renowned authors. When I left college, I continued reading these books, buying from bookshops.

“I was thinking of writing in English; I know I would have written in English, but for the request by the Western Regional Literature Committee. In 1954, the committee advertised in the Daily Times for anybody who could write in Yoruba Language to write something contemporary and realistic; the type of books written by D. O. Fagunwa which were on fairies and witches. So, I felt I should try it.”

He, however, said he almost gave up in his effort at becoming a Yoruba writer after coming up with several stumbling blocks as he said, “I wrote a manuscript which I sent to the committee. It was acknowledged, but that was the end of the activity because I heard nothing again from them. I had written the novel in an exercise book which I posted to them. I was then in the Akure area. They said they got it and that they would be contacting but they never did.

“It was indeed [discouraging]. In fact, I did not make any other attempt until 1960, six years after I sent that script to them. In 1960, there was another advertisement by the same committee, asking ‘where can we find Oladejo Okediji’? It was the Independence Year and I was then already in Ile-Ife. I wrote back and gave them my address.”

A little over a month ago, one of the children of the late Okediji, Moyo, a professor of Art History at the University of Texas, United States, announced that his now late father was scheduled to be honoured by two institutions to mark his 90th birthday later in the year.

Moyo described his father as “a handsome gentleman” who was due for honours from the Obafemi Awolowo University, Ile-Ife and the South West Association of Nigerian Authors to acknowledge his contributions to African Literature.

The event, he said, scheduled to come up from July 31 to August 3, was being organised by Institute of Cultural Studies, OAU, Ile-Ife and the South West Association of Nigerian Authors (SWANA).

Reacting to the death of the late Okediji, a former president of the Association of Nigerian Authors (ANA), Dr Wale Okediran, described him as a rallying point for the Yoruba genre of literature.

Speaking in a telephone interview, he said Okediji would be missed by all professionals in the industry, but added that he looked forward to how he could be immortalised and called for the establishment of a foundation in his name, which would make the current generation to have a touch of the book.

On his burial, Dr Okediran said “ANA, particularly, Oyo State chapter, would be part of his burial ceremony because, as we all know, ANA has always been known to promote both literature in English and indigenous languages.”