Property and Environment
By Tunde Alao On Mar 28, 2018 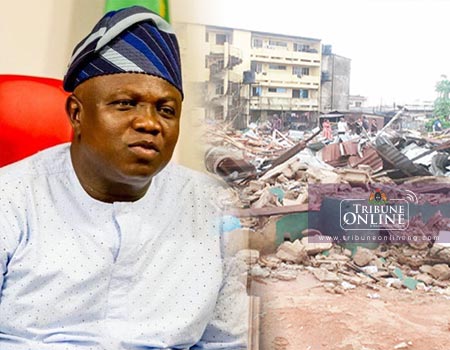 While Messrs Visionscape Sanitation Solutions(VSS) has said there is no cause for alarm over the resolution of the Lagos State House of Assembly to summon the executive arm of the State government to explain the state of waste management in Lagos, lawyers who spoke with the Nigerian Tribune described the move as “failure of oversight function abinitio”.

The House of Assembly had in a resolution invited the Accountant-General of the state Mrs. Abimbola Umar and  three members of the State Executive Council to brief its ad hoc committee, on all issues surrounding waste management in Lagos and the role and status  of Visionscape.

But in an interactive session with journalists last week,  one of the panelists representing  Visionscape, Dipo Wintoki said the House of Assembly was performing its statutory function and there was no cause for alarm since Visionscape had a valid contract from the government.

“The emergence of the contract was done through regular and due process. The Lagos State Government  has an obligation to fulfil its part of the contract. The process of awarding the contract to Visionscape was not arbitrary. This will be resolved,” Wintoki said.

Condemned the action taking by the Assembly members that the consultant in charge of collection and disposal of the waste had failed to meet up with the vision provided in the new law passed to tackle issues around refuse in the State, Mr. Femi Ademola, a Legal practitioners, said the statement shows that the lawmakers have failed in their legislative assignments.

Angered by the statement attributed to the Speaker of the House, Mr Mudashiru Obasa, who said the consolidated law on the Environment which the House passed was in order, but that it needs to be pointed out that a provision of the concession included in the law was not complied with and that  government ought to revert to the House before bringing in Visionscape,

This comment, Ademola said portrayed the Assembly men as incompetent bunch, who “either have a hiding agenda,or sheer naivety of their oversight functions”.

“The question one needs to ask the Honourable Assembly men is whether they are on leave for close to one year that Visionscape has been operating in Lagos State.

“Besides, threatening to stop the payment to the company is beyond one’s comprehension. Does the firm has not been receiving payment since? Does the Assembly not aware despite their claim that it wasn’t budgeted for? If that is not self-indictment, I don’t know what we can call it”, said the lawyer.

Another commentator, James Ademiluyi, also a lawyer, disagreed with the timing of the Assembly’s intervention, which he is belated.

To Ademiluyi, this type of attitude is capable of sending wrong signal to genuine foreign investors. “I wonder where were these people when the Executive is not doing things according to the law and waited for close to one year before they wake up from their legislative slumber, realising that a law they enacted was not properly followed?”

However, speaking on the progress made so far on waste situation in the recent time, Visionscape Sanitation Solutions has revealed that it has cleared 2000 of the almost 5000 illegal dumpsites in Lagos.

The Head of Planning, Visionscape Sanitation Solutions(VSS), Kiran Reddy, at the media parley said that approximately illegal 5000 dumpsites also known as black spots were found during a baseline study of the state.

Speaking on the implementation process, the Head of Corporate Communications, Motunrayo Elias averred that over 100 PSP operators have joined Visionscape to aid waste collection in the state.

Elias appreciated the PSPs for all the work that had been done preceding before Visionscape arrived. She said the company was willing to work with the PSPs

“We are willing and we have made progress and we will all work together, “ She said.

She however noted that though the organisation commenced full operations in January this year some progress had been made. She said that Visionscape was embarking on advocacy programme at the grassroots level.

It would recalled that the Lagos State, the state House of Assembly last week, summoned three Commissioners, their respective Permanent Secretaries, as well as the Accountant General of the state following a motion, moved under Matters of Urgent Public Importance, by Mr Lanre Ogunyemi the Chairman, House Committee on Education.