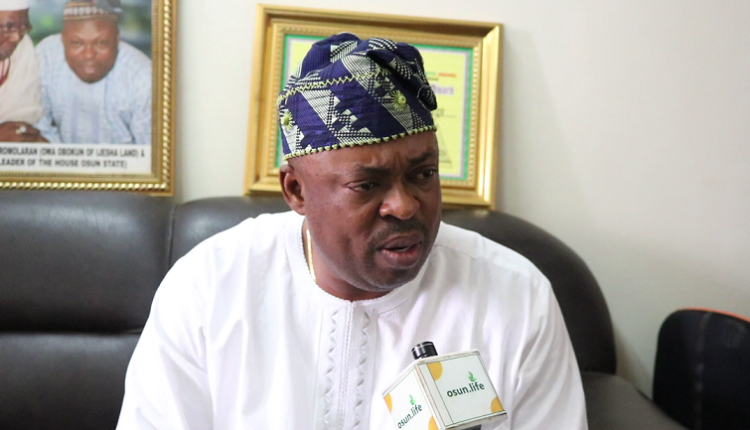 The Speaker, Osun State House of Assembly, Hon Timothy Owoeye on Tuesday said for the legislature to retain the trust of the people, lawmakers must provide leadership and direction during challenging times.

He lamented that the country is currently being confronted with insecurity, inflation, unemployment, thereby making it expedient for legislators not to see lawmaking as business as usual by providing qualitative leadership and direction to tackle Nigeria’s challenges.

Owoeye, who spoke during a 3-day legislative retreat for the state lawmakers at Royal Park Hotel, Iloko-Ijesa, with the theme, “Enhancing Service Delivery Through Effective Legislative Engagement”, said the lawmakers had no alternative than to fully collaborate with the executive arm of government to realise a well developed and inclusive economy.

According to him, as we all know, this is a critical time for us as a nation. We are going through difficult times, security issues, unemployment, inflation and dwindling opportunities. Our people look up to the House of Assembly for direction and to provide opportunities for them. It has become imperative to us that it is no longer business as usual.”

“At no time in our history has the need for synergy of purpose and drive to embrace and give full effect to this obligation  been more acute than now, the present House of Assembly is fully committed to this obligation and it is in you (distinguish members and standing committees) that we will rely on to play our roles effectively.”

“I must also note that the overriding goal of the current Assembly is to place Osun economy on the path to sustainable growth, poverty elimination, economic opportunities, block loopholes and tackle injustice around us.”

It is time to show that the Assembly is ready to play its role as a primer of development and the watchdog for the sustenance of democracy. We need to sanitise our structure and lead by example”.

In his address, Osun State governor, Mr Gboyega Oyetola tasked the legislators to make people the source and essence of their legislative engagements

Represented by the Secretary to the State Government (SSG), Prince Wole Oyebamiji, the governor underscored the need for the lawmakers to design a roadmap to guide and drive its vision, which will embody institutional and personal performance charter.

Oyetola stated “legislative engagement is pivotal to legislative success and excellence. Indeed it is the tool of the legislature, the arm of government regarded the world over as the symbol of democracy, to perform its lawmaking role and deliver service in all sectors.