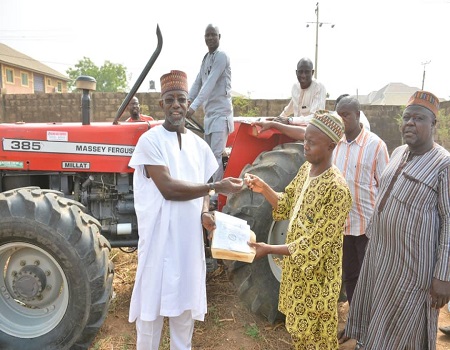 A House of Representatives member representing Baruten/Kaiama Federal Constituency in the National Assembly, Hon Zakari Mohammed has presented a tractor to farmers in Baruten Local Government Area(LGA) ahead of the farming season.

He said the tractor would boost rice production and also discourage the importation of foreign rice.

He said the tractor will be available to farmers at a subsidised rate.

Mohammed made the disclosures during the presentation of the tractor to the Chairman of the local government, Alhaji Isa Seidu who was represented by the Internal Auditor of the LGA, Alhaji Shittu AbdulAzeez.

He said: “Today, I am presenting it for the use of the farmers in Baruten local government and it will be under the care of the local government as one of the dividends of democracy and as my noble contribution to agricultural production because our people in Kaiama and Baruten are agrarian.

“We have enough land to cultivate rice but if the government becomes the buyer of last resort through off-taker arrangements, it would improve agriculture not only in my area but also the Nupe speaking areas of Kwara generally.

“Specifically regarding Baruten and Kaiama, the tractor will be available at a subsidised rate which would be under the care of the local government and they will charge less than half in order to raise fund for its maintenance.

“Being under the care of the council, it will also guard against it being abused when kept in the hands of individuals. Subsistence farming cannot take us anywhere and there is no nation that has developed through that. Nations that have grown very well have developed through mechanised farming.”

Speaking on the importation of rice, Mohammed said: “For rice importation, stopping the process has to be gradual and not sudden because doing that will make the price soar again and we definitely must be mindful of that important fact and apply a common sense. Our rice is better, richer and of course, the nutritional value is also of the essence.”

While explaining why the presentation was delayed, Mohammed promised to make the second tractor available to Kaiama LGA as soon as it is procured.

He said: “The journey began in 2017 when through my intervention programmes I applied for two tractors but eventually only one was supplied and I also observed that it was substandard of the sort and appeared like a fairly used and it is here for which you all to see.

“ Salmac, the contractor is also here and anyone can do the verification. I have been battling with the contractor and NCAM, the agency that had the project domiciled with it.”

The lawmaker denied alleged diversion of any tractor.

He added: “While waiting for the supply of the second one it was discovered that there had been mischief in town that the tractors were missing or that it had been converted to private use and all sort of stories. But I won’t make it clear that nothing of such was the case.

“It was just that I wanted to be a fair-minded individual. I have two local governments in my constituency and only one was provided and even that one was substandard. But in the light of the attempt to politicise the issue and use it as a campaign of false accusation against me, I have to do the presentation to one of the local governments which are Baruten in order that we can rest this case.

“To also make it very clear, the document here represents the supply that was done to me which will be made available to journalists for record purpose. To God be the glory, for the eight years that I have represented my constituency, I have not been found wanting but unfortunately some people attempted to introduce slant, twists, and rumours were taken to town because politics is by the corner and protest were even organised and staged by our opponents in respect of the supposed missing tractor which existed only in their imagination.

“I want to make it clear that I who initiated it meant well for my people but if it would amount to the fact that one has to be favoured before the other, then one of the local governments would have waited until the other one would be available.”

The chairman of Baruten LGA assured that the tractor would be used for the development of Baruten farmers.

Strike: ASUU has not made fresh demands — Ogunyemi