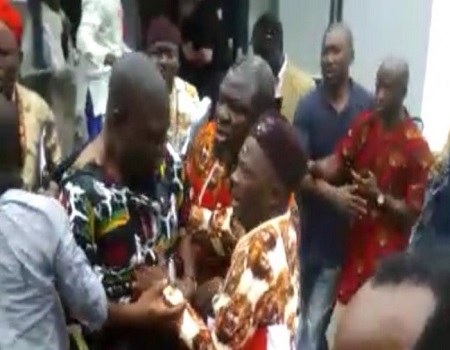 More prominent Nigerians have continued to condemn the assault on former Deputy President of the Senate, Senator Ike Ekweremadu, on Saturday in Nuremberg, Germany.

The President of the Senate, Ahmad Lawan, in a press statement issued on Sunday in Abuja and signed by his Special Adviser on Media, Ola Awoniyi described the assault “as part of the sacrifice of leadership.”

Senator Ekweremadu was to give a keynote address at the Second Igbo Annual Cultural Festival and Convention organised by Ndi-Igbo Germany in that city when he was attacked at the venue.

Members of the outlawed group, the Indigenous People of Biafra (IPOB), have since claimed responsibility for the attack on Senator Ekweremadu.

But the President of the Senate in his statement said the former Deputy Senate President did not deserve the assault as Senator Lawan noted that Senator Ekweremadu was an illustrious son of Ndigbo who in his political career has consistently identified with and defended the cause of his people.

“It is incredibly absurd for anybody to blame the distinguished Senator for the violent criminal activities in his home base, the purported reason cited by the mob for the bewildering attack.

“Senator Ekweremadu, like all his distinguished colleagues in the Ninth Assembly of the Senate, is concerned about the insecurity and other challenges in that area and other parts of Nigeria. Senator Ekweremadu has also been at the forefront of the patriotic efforts to find lasting solutions to the challenges.

“The barbaric attack on Senator Ekweremadu at a forum to which he was invited to contribute to charting a course for the progress and happiness of Ndigbo debase our values as civilised people. It is most reprehensible and should be condemned by all right-thinking Nigerians.”

He urged the German authorities to identify those involved in what he called the despicable act so that the law could take its course against them.

The President of the Senate “urges Nigerians to always reflect deeply and broadly before embarking on a course of action and advises the youth to ventilate whatever grievances they have along lines prescribed by the law and recommended by reason and democratic ethos,” while appealing to “Senator Ekweremadu not to be deterred by the incident from his path of service to his people and Nigerians in general, but to take it as part of the sacrifice of leadership.”

Also, the Peoples Democratic Party (PDP) said that the attack on the party chieftain was uncalled for, unprovoked and cannot be justified under any guise whatsoever.

It added that such assault on a leader was completely unacceptable and does not portray our nation in the proper light.

The PDP, therefore, charged the Nigerian Ambassador to Germany as well as the German government to take appropriate decisive action on the matter.

The party also urged the Federal Government, particularly, the National Assembly, to take an urgent comprehensive step to address issues leading to acts of resentment and agitations by Nigerians within and outside the country in the last four years, under President Muhammadu Buhari’s “misrule.”

While also condemning the attack, former Abia State Governor and Chief Whip of the Nigerian Senate, Dr. Orji Kalu described the action of the mob as uncivilised, unacceptable and barbaric, the former governor urged Ndigbo to respect leaders at all levels insisting that the only way the South East region can be prosperous was by embracing dialogue, peace and unity.

Kalu in a statement issued by his media office, urged the Embassy of Nigeria in Germany, the German government and appropriate authorities to bring the perpetrators of the ugly incident to book saying: “after watching a viral video of the physical attack on former Deputy Senate President, Senator Ike Ekweramadu, I was not only disappointed but irritated and disturbed with the action of some members of IPOB. The assault on the senator is a slap on Igbo leaders regardless of age, party affiliation and religion.

“The perpetrators of the uncivilised act must face the wrath of the law. Senator Ekweramadu is not only one of the Igbo leaders but also a prominent Nigerian and as such should be accorded due respect by all and sundry at home and abroad.

“For the South East to move forward, the people of the region must embrace dialogue as a way of resolving pertinent issues and eschew violence.”

While appealing to Ndigbo across the globe to be law-abiding and good ambassadors of Nigeria, Kalu urged Igbo groups to educate their members on the consequences of social vices.

On his part, Minority Leader of the Senate, Senator Enyinnaya Abaribe described the attack as reprehensible and utterly sacrilegious.

Abaribe in a statement issued in Abuja described the physical assault on the former Deputy Senate President as a despicable act, that smacks of utter ignorance of the prevailing situation at home with regards to what the leaders are doing in the circumstance.

“It is a brazen show of ingratitude to a man who has been at the forefront in the struggle for all that is good for the Igbo race.”

The Minority leader further said he and the entire minority caucus in the Senate were appalled on the very nauseating attack on the revered Deputy Senate President, Ekweremadu for no reason whatsoever. “We condemn it,” Abaribe said.

He further described Senator Ekweremadu as someone who has given his all in standing for the Igbo race, particularly when “we stuck out our neck to arrange and stand for surety for the IPOB leader, Nnamdi Kanu.

“Obviously this is not how to repay a man, an outstanding leader of men, an unpretentious Igbo leader who has given his all even going as far as deploying his means to arrange for the bail of Nnamdi Kanu, not minding the repercussions to his illustrious political career.

“It is unfortunate. The perpetrators of the attack should know that as Igbos, we respect elders and reverence our leaders. The unwarranted attack is not the character of the Igbo. This is un-Igbo. It is most worrisome and even inconceivable that the attackers will choose an auspicious occasion where our people are celebrating and showcasing our rich culture to exhibit such unbecoming and condemnable conduct in the name of agitation.

“No, that was not agitation, no right-thinking human will identify with such behaviour. Yes, Nigeria is going through a horrendous phase, which is a fault line that her leaders, particularly we the Igbo leaders are engaging others to find a lasting solution to.

“Resorting to mob mentality and venting the spleen on our leaders rather creates a vacuum that will leave our people helpless and confused in the circumstance,” he said.

Senator Abaribe admonished aggrieved Igbo sons and daughters in the Diaspora to adhere to “rules of engagement in the country when things go awry and that is the way we should go at all times until we reach an acceptable national consensus in which Senator Ekweremadu will always play a major role.”

He, however, appealed to Senator Ekweremadu not to be discouraged in any way, but rather be stoic and take it in its stride as the price often paid in leadership.