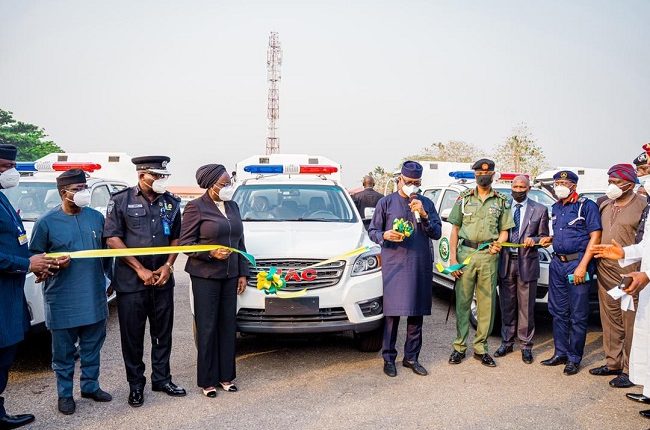 The Ogun State Governor, Prince Dapo Abiodun, has said that the government is working with relevant agencies on laws to prosecute those involved in spreading fake news in the state.

Abiodun stated this at the Arcade Ground in Abeokuta, on Monday, during the handing over of 10 Patrol vans and motorcycles to the newly formed Joint Security Intervention Squad (JSIS), set up to provide security to the people, particularly in Yewa axis of the State.

The governor frowned at the irreparable damage fake news has been doing to the corporate existence of Nigeria, calling for collective efforts to stop it.

“We need to stop this proliferation of fake news because it is threatening our national security and I want to plead with our mainstream media to verify their information before publishing. We are also working with the Ministry of Justice to ensure that we have a law in place that provides serious measures for people that are caught propagating fake news.

He observed that fake news had led to expanding the farmers/ herders’ crisis in the State, adding that, “we’ve also seen that the spread of fake news has become the order of the day. People have this pre-occupation of sharing news that they consider sensational without authenticating its genuineness.“

He debunked the report of Ogun State indigenes being refugees in the neighbouring country, as a result of the recent clash, maintaining that it would have attracted diplomatic moves between Nigeria and the country hosting the refugees if the report was true.

Abiodun said the state security outfit, ‘Amotekun’, would soon be launched to complement efforts of the Task Force, just as the government has liaised with Telecommunication providers to improve their services in the areas, to enable people to have access and make calls, particularly during emergencies.

The state helmsman added that a committee saddled with the responsibility of looking into the cause of the crisis with a view of finding lasting solutions, as well as taking charge of similar issues whenever they occur, was one of the resolutions of the farmers/herders’ parley held recently, adding that as a result of the porous borders and vast forest reserve, a Special Task Force made up of military and paramilitary personnel, would provide security in the areas.

Governor Abiodun pledged that similar security outfit would be extended to all parts of the State, said the Taskforce, which would be commanded by a Chief Superintendent of Police, was to support the efforts of the Peace Committee, adding that they had been provided with needed logistics to carry out their assignment effectively.

On February 27, 2020, Nigeria’s first index case of COVID-19 was confirmed in Lagos. This was the first reported case in Sub-Saharan Africa. An Italian, who had just returned from Milan, Italy on the 25th of February 2020, was confirmed by the Virology Laboratory of the Lagos University Teaching Hospital (LUTH), and managed at the Infectious Disease Hospital (IDH) in Yaba, Lagos…Law to prosecute purveyors of fake news underway in Ogun, says Abiodun

How Leading Businessman Peter Triantos Started his Company from Scratch