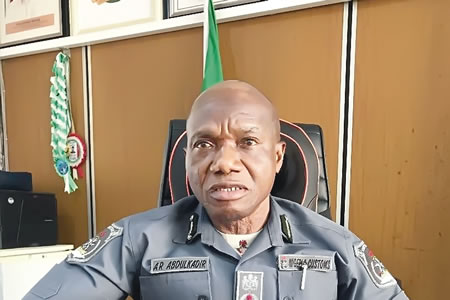 Comptroller Adamu Abdulkadir is the officer in charge of the Oyo/Osun Area Command of the Nigerian Customs Service (NCS). In this interview by Crime Editor, OLUWATOYIN MALIK, he speaks on the activities of the command against smuggling and other illegalities.

What has been your experience since you assumed duty as the Area Controller of Oyo/Osun Area Command?

At the inception of my administration, I took time to know my environment. I came in November 2020. I went round the nooks and crannies of Oyo and Osun states, met with the traditional rulers and pleaded with them to talk to their subjects because I know they are very powerful and they are known to be opinion leaders. I know that Oyo and Osun states’ terrains are very wide, so it took me almost a month to see them and they all gave me their words.

I told them that there were so many programmes that the Federal Government had rolled out to reduce hardship and make the citizens fully employed in a legitimate way. Some of them complained about their children not being able to get access to Customs and I told them I would forward it to the authorities for consideration. We had a very good interaction but then after almost one month going around and doing all these, I realised that I had made a very good impact but some people that are used to a particular way of life hardly leave it.

Before long, we started having issues with smugglers. My boys were making some arrests. There were some infractions in some notable markets. We made sizeable numbers of item seizures. We have a very hostile environment because when my boys move in to carry out their legitimate duty, an entire village would take it as their fight. The people would come out with all sorts of weapons such as pump-action guns, Dane guns, cutlasses and, at times, charms. I have advised them (officers) to operate within the purview of rules of engagement. They took my advice and they are working just that way. So, we have engaged the so-called stakeholders that they should change their line of business; that this one could not save them. I imagine that it costs them a lot of money. At times, I get scared. I wonder where they are getting money from. You will seize thousands of bags of rice but that would not deter them from going all out again to bring them in. Why can’t they leave it and look for legitimate livelihoods?

How did you come about the latest interception and seizure?

The first thing that is part of our training is that we have to work on informants. We have a unit called Customs Intelligence Unit. Their job is to gather information, process it into intelligence and show it to those that need to know. So, we engage the Customs intelligence unit and informants that are out there, and they always give us results. That was what happened nights ago. We had credible intelligence that some goods which were bags of foreign parboiled rice were being stocked in a residential building. First, we needed to identify the building. That was why it took them almost two nights to do a clinical job. At the end of the day, it yielded result. You know why I am so impressed? There was no casualty or any incident that would have needed a call for reinforcement. They came out safely. The only thing was that they needed to hire buses to convey the bags to Customs office but that took time because the community felt ‘how could you come to seize our brothers’ items and want our vehicles?’ So, it took a very long time before they could to bring them in. That is why I was so impressed because it is not easy in the terrain where we are operating. In August in Ibarapa, there was an incident in which our officers were inflicted with machete cuts. Even about three weeks ago in Ogun State, some officers were killed. Whenever they are going on an operation, as a Muslim, I always go on my mat to pray for their safe return because no leader would want to see any of his officers killed. The goods were discovered somewhere in Osun State.

Are you saying that bringing goods like bags of rice and others is no longer allowed even with payment of duties?

No. This is the only way we can encourage homegrown rice. The foreign rice, we don’t know when they were prepared and bagged. Some have even expired but our own is very nutritious. But Nigerians have flair for foreign goods. That is just the problem. Some of things that are here are not good for human consumption. Buying homegrown rice is the only way we can develop our country. Nobody will do it for us. That way, our farmers can actually enjoy the fruit of their labour because some of them took loans to go into the venture. But presently, they don’t get patronage because some foreign rice brands have found their way into the country. Mr President wants to diversify from petroleum and agric is the best option. It has potential for huge employment. Agric is a very good platform for employment and the government is spending a lot of money. So, we will not sit down and allow these smugglers to thwart the effort of the Federal Government.

Is that why there is a ban on importation of rice?

Yes. There are some other items but rice is very important. It is not allowed from any border and those bringing them in are smugglers.

How many bags were seized in the last operation?

How were you able to achieve the generation of over N50 billion as revenue in your command in less than a year?

This command is blessed with both excise and enforcement. That is where we get our revenue from. We collect the bulk of it from the British American Tobacco Company of Nigeria. They are always making us proud. We have about five excise factories but one is almost moribund now. We have BATCN, International Breweries in Ilesa, Nigerian Breweries in Ibadan andd Ori Ade Distillery Company in Ilesa, which has almost gone moribund due to what the management said is the increase in the price of ethanol.

How do you curb smuggling and arrest violators if the illegality can’t be totally erased?

Yes, we have had cases. Recently, we had two suspects in our cell and their lawyer applied for their administrative bail which we went through to make sure they met the bail condition before they could enjoy it.

We have been having them. They would go to court, some would get prosecuted but it has not deterred them. That is why I said I engaged the services of the royal fathers.

Many citizens are against the arrest of smugglers in cities and towns, describing officers as incompetent in carrying out their duties at borders. How do you perceive this?

Good. Let me tell you, Ibadan and Osun have a wide terrain. And before now, we had enough vehicles. We thank God that the Comptroller General of Customs, Colonel Hameed Ali (retd), has given us 10 new Toyota Hilux vans and I have given them out to my patrol and surveillance officers to be on their toes. That is the success we are seeing today. The recent seizure was the work of the intelligence. The distance from Oyo to the border will take you hours and the roads are bad and these smugglers have been in the game for a long time. They know when officers are around. Weeks ago, we had a promotional examination and the majority of the officers travelled to do theirs. That was when we had an issue along Ogbomoso Road but we got them.

We cannot say we are working here and all villagers should leave. It is not possible. Most of the people that live close to where we are operating are informants for smugglers. And these officers are not meant to stay in the place permanently; they are meant to go round. We have to work based on intelligence. Most of our operations are based on intelligence because the place is too wide. This area is very wide and is particularly dangerous in dry season. Smugglers can use any part to come in or to go out but I bet you, with these new vehicles, we will do justice.

Do you have legal backing to invade warehouses?

Yes, we do. Customs and Excise Management Act (CEMA) is our guiding law. Just as I once said, if you try to sabotage our job, Section 11 is against obstruction of officers. You are not supposed to get in the way of our duty and the section gives us the power to sanction anybody trying to inhibit our duties.

What is your advice for smugglers and Nigerians generally?

It is high time Nigerians, especially those who are used to illegal businesses, changed their means of living because nobody can develop this country for us; we are the ones to do it.

When you talk of developed countries, such as the United States of America, the United Kingdom, or Europe, the citizens developed them, not foreigners. The only way we can do that is to start being patriotic citizens. If you know that what you are doing is illegal, why can’t you change to a good business?

We should make ourselves great rather than engaging in this hide-and-seek in which you can only get lucky for a very limited time. Before long, everything will be gone and you start from scratch.

We should change the way we look at life in Nigeria.

My biggest reward will be for victims of Pfizer’s illegal vaccine trials to get their entitlements —2021 joint best journalist in West Africa, Uthman