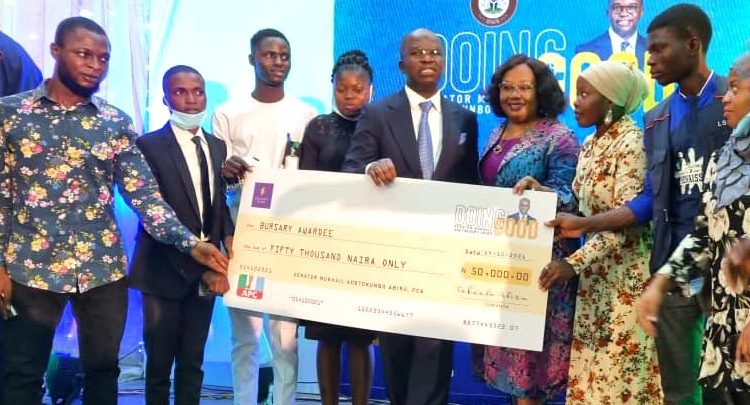 A Senator representing the Lagos East Senatorial District at the National Assembly, Adetokunbo Abiru, has promised to sustain the N30 million annual bursary awards he instituted for brilliant but indigent students of tertiary institutions in Lagos State.

He gave the promise on Thursday at a maiden award ceremony in Ikorodu where a total of 600 students who are pioneer beneficiaries of the bursary awards were presented with their N50, 000 dummy cheques each.

Speaking further, Senator Abiru said the annual bursary award was part of his own ways to support tertiary school students from across the 16 local government and development council areas of his senatorial district that are brilliant but have financial challenges to pursue their higher education.

He said he believes that the bursary scheme would not only promote qualitative education among young adults from the senatorial district, but would also have long-term positive effects on the economy of the state and Nigeria by extension.

He said that is why he extended the gesture beyond students from the senatorial district who are in Lagos state-owned tertiary institutions such as LASU, Lagos State Polytechnic (LAPOTECH), Adeniran Ogunsanya College of Education (AOCOED), Lagos State College of Nursing and so forth to include those in University of Lagos (UNILAG), Yaba Colege of Technology (YABATECH), Federal College of Education (Technical) and the Federal College of Fisheries and Marine Technology.

“We believe that all our youths who are brilliant but have financial challenges should be given equal opportunities by helping them to achieve their educational pursuits,” he stressed.

He explained that all the beneficiaries who are from 200-Level irrespective of courses of studies and schools were chosen by a non-political and independent Bursary Advisory Board who are scholars and chaired by a senior political science lecturer at LASU, Dr. Abiodun Fatai-Abatan for transparency and fairness purposes.

“The board members were the ones who did the background checks and screened all the applicants who were up to 2,800 based on criteria set for the purpose and finally picked 600 successful ones from the number for this year.”

He however, asked all the beneficiaries to remain focus and committed to the academic pursuits, saying they could only enjoy the bursary awards subsequently if they maintain good grades of a minimum of Second Class lower or it equivalent till graduation.

He said on his part, he would certainly sustain the 600 slots in subsequent years.

In their separate remarks, Governor Babajide Sanwo-Olu (represented by Mr Wahab Tokunbo), Chairman of the occasion, Prince Abiodun Ogunleye and LASU VC, among others, lauded the effort of the benefactor, saying the impacts would be huge and transcend the direct beneficiaries and their families.

According to the governor, good education and capacity building are the best investments to give to youth anywhere globally and we commend as a state government Senator Abiru for contributing this much to advance education pursuits of indigent youths in the state.

Some of the beneficiaries, who on a sideline spoke to Nigerian Tribune expressed happiness over the gesture, saying the N50, 000 meant a lot of money to them and would certainly go a long way in their academic pursuits.