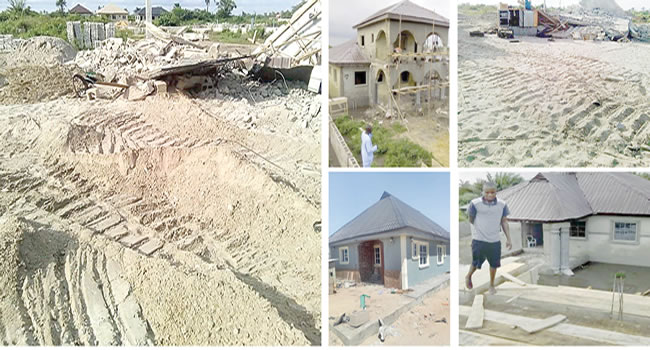 In this piece, AKIN ADEWAKUN reports the displacement of erstwhile residents of Oko-Olomi, Olowu, Oko’le, Oko-Jegi, Idi Ope, Seriki-Alabula, Aina, Itapanpa and others in Ibeju Lekki area of Lagos, following their bloody encounters with alleged landgrabbers and their appeal to government and other relevant stakeholders to come to their aid.

Chief Lateef Eleku, his younger brother, Idowu, and Chief KufuliBabatunde had lived peacefully in Oko Olomi, a community surrounded by 12 other communities in IbejuLekki Local Government Area of Lagos State, for over five decades. But there were individuals, living and dead, that had lived there for much longer.

It was a community that had brought them peace, influence and wealth; an ideal environment for any individual desirous of peace and tranquility.

But, all these changed on one Sunday morning in April 2016.  The peace of Oko Olomi and its environs was disrupted, as a gang of gun-wielding men invaded 13 communities in the area, shot into the air, and by the time the dust settled, the ownership of the communities had changed hands. Their inhabitants, whose families had occupied the area for more than 200 years, were sent packing.

Curiously, in spite of the several legal attempts by the displaced residents to get reprieve and return to their homes, more than four years after, Chief Eleku, the traditional leader (Baale) of the community, and many others are yet to get justice.

In a court order with suit number EPD/047/2016, Justice A.J. Bashua of the High Court of Lagos State, Epe Judicial Division, holden at Epe, ruled on June 27, 2016, wherein it was stated that an interim injunction is granted mandating Toll System Development Company, its agents and privies to remove all thugs and hoodlums on the claimants’ land at Oko-Olomi pending the hearing and determination of mandatory injunction.

Besides the flagrant disobedience of several court orders by the invaders, according to the residents, other efforts to reclaim their communities have been met with cruelty, and for them, the hope of returning home is gradually becoming dimmer.

Tales from Chief Eleku and other residents of their ordeals in the past four years sound incredible; like a scene from a popular Nollywood film, yet even then, some would still have found it unbelievable!

But those claims are valid, they insist. Their plight, they argue, represents those of thousands of displaced residents of Oko-Olomi and 12 other villages of Olowu, Oko’le, Oko-Jegi, Idi Ope, Seriki-Alabula, Aina, Itapanpa and many others in Ibeju Lekki area of Lagos.

Chief Eleku expressed shock that the community, which has been in existence for over 200 years, could be overrun without any consequence.

“I’m from Oko-Olomi. I was born and bred there. We’ve been living in this area for a long time; should be over 200 years now. We’ve built houses and raised families there. Burial grounds of our forefathers are testimonies that our people had been living in Oko-Olomi for long.

“It was therefore a huge shock for me when a group of thugs invaded the area; about 13 communities in all, one Sunday morning in April 2016. They came in about five buses, fully armed, even with some policemen following them.

“They came with a caterpillar, and immediately they came in, they started using the caterpillar to dig holes at the entrance of the communities. Remember we have about 13 communities here. The intention was to prevent us from entering the place,” he stated.

Reliving the incident of that fateful day, Chief Eleku expressed disappointment that such an incident could happen in present-day Nigeria.According to him, till date, nobody has been arraigned for driving him and his people out of the area.

“They are still in the area. They have succeeded in driving us out. And despite our cries and other litigations, they are still building as I talk to you. I’m surprised that a few people could do this to innocent communities of thousands of people without any repercussions. I’m also surprised that they could go to the extent of driving us out and maiming some residents, without any repercussions.

“My younger brother, Idowu Eleku, was stabbed and macheted. He was stabbed in the neck on that day, and he almost died,” he recounted.

When asked of the possible motive behind the attack and the subsequent take-over of the communities, Chief Eleku said they were told that a company had commissioned one someone to secure the community and its environs on its behalf.

“They said this person was given the job to take over the community and demolish all the buildings. And at the end of the day, about 13 communities were sacked. And since that incident in 2016, nobody dares enter the place. Now they’ve started selling the land,” he stated.

Chief Eleku, who ran a thriving block-making factory in the community before the incident, said three buildings, his generator and block-making machines were vandalised and sold by the intruders.

Perhaps, the greatest shock for him was the ease with which court orders were disobeyed by those who had laid a siege to the community.

“We even got a court order restraining them from doing anything there, but they did not respect the order. Till date, they are in the communities building, contrary to court orders,” he added.

While the scar left by the incident on Chief Eleku was psychological, that of his brother, Idowu, was also physical.

According to Idowu, he was attacked during an early morning raid on the community.

“The boys just came, fully armed, and were busy pursuing us. They later caught up with me and started hitting me with the weapons in their hands. I was later stabbed. They later left me for dead; otherwise, the intention was to kill me,” he stated.

He said when the incident was reported to Elemoro Police Station, they were told that the issue was beyond them.

“I live in an uncompleted building now with my family, since we were displaced. Others squat with relations, while many looked for places to erect temporary structures,” he stated.

Chief Kufuli Babatunde, the Baale Olowu, one of the 13 sacked  communities, was worst-hit by the siege.

Aside from losing his properties and his block-making factory, his wife of many years also lost her life in the process.

In an emotion-laden tone, Chief Babatunde narrated how the whole community was sacked on that fateful day, and every resident sent on ‘exile’.

“I was born on April 12, 1967, in the community. I farmed there, and my parents lived and died there. They were buried in the community and we even had a family house.  I also had my own houses and we had people who also bought land from us that were living with us there.

“I was planning to go to church that day when some workers in my block factory, ran to me telling me some people had invaded our community. When I went out, I saw a crowd of  completely-strange people, well-armed.  They started shooting to scare the villagers. They brought a caterpillar that dug the main entrance used by residents. They were beating everyone in sight. One of us, Okunu Elekun, was injured and rushed to the hospital. We were running helter skelter, trying  to protect our families, and when we discovered the situation was getting unbearable, we had to go the nearest police station, where we were told it was ‘from above’, and therefore beyond them.

“The animals that we were rearing are what the invaders are feasting on now because they are still there. It’s so brazen; it’s as if there is no law in the country.

“Honestly, I’m surprised at this turn of events. I have been in the community from childhood. I went to school in the community. Nobody had ever come to us to say that our forefathers sold land for them. And the day they came, they didn’t have any paper that we should quit the land. What we saw were policemen who followed the landgrabbers. We didn’t know they were landgrabbers initially, until we got to Elemoro Police Station.

“Now, all our block factories are gone. The animals that we rear are gone; everything we had laboured for over the decades gone. Unfortunately, they are not even allowing us to stay nearby at all.

“About three private schools and four hospitals were pulled down. I had three houses, apart from my family house. All my block factories, the blocks, the machines and everything were carted away. We didn’t even take a pin. My children’s belongings, my wife’s belongings and mine, we couldn’t salvage anything.

“My wife was expectant then, so all the baby items that we had bought were destroyed. It was quite a sad experience; it was least expected.”

But while Chief Babatunde and others are living to tell the story, the dead also had their fair share of the invasion as tombs were not spared. They were demolished and the land on which they were interred are presently being sold out to willing buyers with very deep pockets.

“My father’s tomb, those of his father, and his father’s father were all there. That is to tell you that we had been in that community for long, and had been living peacefully there, before this ugly incident.

“We were not even given the option of a possible re-burial of those great ancestors of ours,” he added.

Old age never held any appeal to those marauders either. The aged in the communities, especially some pensioners who had spent their life savings putting up some buildings in the area, are still at a loss regarding the fate that befell them that Sunday morning.

“Having lost all they had to the invasion, some now squat at their children’s places. Others, who are not so lucky are sometimes seen roaming the streets, looking for how to make ends meet,” he added.

Chief Babatunde and other displaced residents are demanding justice. Besides paying some form of compensation for the trauma and physical damages inflicted on them and their belongings, they want the relevant authorities to intervene and bring the perpetrators of this heinous crime to justice.