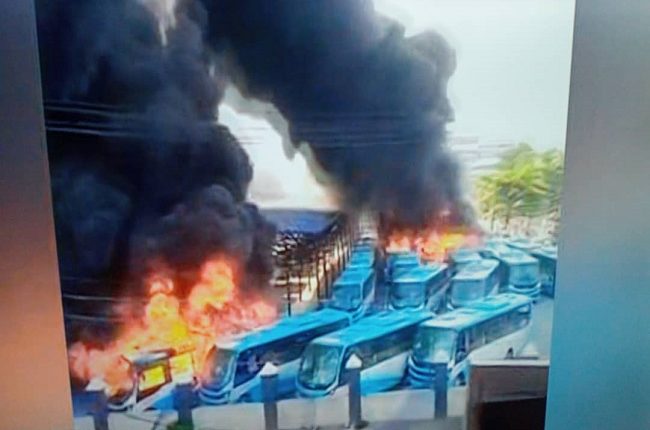 Various properties belonging to the Lagos State government, including several commercial buses at the Bus Rapid Transport station at Oyingbo, have come under attacks as angry youths troop out to protest the killing and wounding of protesters by soldiers at Lekki.

Reports also indicated that the TVC office in Ketu area of the state and the headquarters of Lekki Concession Company Limited in Lekki have come under attack, while the family home of Governor Babajide Sanwo-Olu and that his mother in Lagos Island and Surulere respectively were said to have been burnt.

Some vehicles on the TVC office were set ablaze by some hoodlums, in the attack which took place this morning.

The All Progressives Congress (APC) has told a Federal High Court in Abuja, that the Comrade Adams Oshiomhole-led National Working Committee (NWC) was sacked to solve the internal leadership crises rocking the party. Sanwo-Olu

The Emir of Zazzau, in Kaduna State, Alhaji Shehu Idris has died in his palace at the age of 84. Sanwo-Olu

His son, Aminu Shehu Idris, confirmed in an interview with the Tribune Online that his late father who was appointed on 15th February, 1975 and spent 45 years in the throne died on Sunday after a protracted illness. fire

A Kano based industrialist, Chief Kalu Ogbonnaya, has advised the Federal Government to take necessary steps to stimulate the nation’s economy to prevent a recession post-COVID-19.

Ogbonnaya who spoke in an interview with the News Agency of Nigeria (NAN) on Thursday in Kano, said as a result of the coronavirus raving the world, no business has been moving. Sanwo-Olu