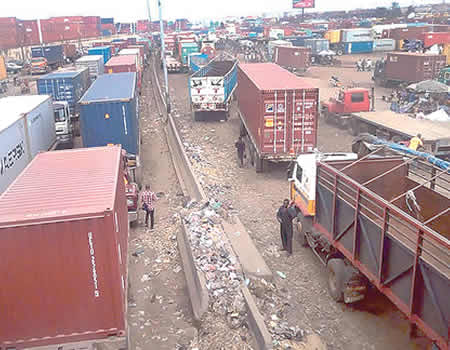 The Lagos State government lockdown of the state over the covid-19 pandemic commenced on Monday night, March 30, effectively taking life out of the ever busy roads and highways of the state. With the ports remaining operational, cargo evacuation business has become more tedious and difficult, writes TOLA ADENUBI.

With the restriction of movement within Lagos State, and the ports remaining operational, vessels have continued to discharge cargoes at the ports, and the number of un-cleared cargoes has risen sharply within the first day of Lagos lockdown, forcing operators to raise the alarm that the ports are already 95 per cent full.

“All terminals in Lagos are between 90 and 95 per cent full. Most of the cargo is non-essential. If cargo doesn’t flow, within days, there will be no space in the terminals to discharge other cargo. And some of the cargo waiting to be discharged includes food and medicine.

“There is a need, therefore, to appeal to importers to pick up their cargo and not return empties for next two weeks in order to allow the prioritisation of imports coming in.

“If consignees do not remove their cargo in the next couple of days, the ports will become fully congested and it will be near impossible to discharge incoming vessels,” the spokesman of the Seaport Terminal Operators Association of Nigeria (STOAN), Bolaji Akinola, complained on the eve of the Lagos lockdown.

For cargo evacuation to thrive, the human element involved in it, which are the haulage operators and the freight forwarders, must have unhindered movement across the state and beyond.

Lamenting to the Nigerian Tribune of the inability to visit the ports to clear some outstanding cargoes assigned to him, a clearing agent Mr. Ajikawo Badmus, explained that the no-movement restriction placed on Lagos has ensured he is unable to visit the ports in Apapa because he lives in Sango-Ota in Ogun State.

He said: “I am a clearing agent and live in Sango-Ota in Ogun State. I have about six cargoes that I was supposed to finish their clearance on Tuesday, the day the Lagos lockdown began; but due to the lockdown policy, I have not been able to visit the ports.

“The cargo owners (consignees) have been calling me to know the fate of their cargoes, but there is nothing I can do since the Lagos State government has put a no-movement restriction on the state. How do I get to Apapa from Sango? Commercial buses are not working and I don’t own a vehicle. So, I have told the consignees that they may have to wait till the Lagos State government lifts the no-movement restriction before they will get their cargoes. The documents of the cargoes are with me, and I know the ports are open for business; however, getting to the port remains the issue here.”

When reminded that the Nigerian Shippers Council (NSC) had provided buses to convey agents to and from the ports from strategic places in Lagos, Ajikawo stated that the free transportation provided by the NSC is not encompassing.

“From my last check, the free buses provided by the NSC are located at Festac (by Apple junction), Okokomaiko (at Alakija under bridge), Surulere (by National Stadium), Oshodi (at Charity bus stop) and Ikeja(at Ikeja along bus stop).

“For people like me that live in Sango area, it is difficult connecting Ikeja Along. Some of my colleagues who reside in Lagos in places like Somolu and even Mile 12 have lamented that the ‘no movement’ restriction of the government could not allow them access the free buses at Oshodi.

“If the clearing agents cannot access the ports with their Terminal Delivery Order (TDO), there is no way cargoes can get evacuated at the ports,” he explained.

The Nigerian Customs Service (NCS) collect duty payment on every cargo that leaves the nation’s seaports, and these payments are made through the various banks scattered across Lagos State. With the ‘no movement ‘restriction forcing many banks to remain shut all through Tuesday and Wednesday, many agents could not pay Customs duty, thereby meaning more cargoes will remain inside the ports despite newer ones being discharged into the ports.

Speaking to the Nigerian Tribune on payment challenges, a freight forwarder, Ignatius Obi, stated that the lockdown had forced many banks to shut down their branches in Lagos, and this had made many clearing agents to be unable to pay Customs duty and shipping charges.

Obi said “Payment of Customs duty and other shipping charges is restricted to online payment, but many agents are refusing to use the online platform because when you pay online, you cannot generate receipt of payment. Paying online is risky. At times, if you are very unlucky, the network can be chaotic. Aside from network issue, if you are able to make payment successfully, you cannot generate receipt. I cannot risk such because if there is any hiccup in the chain of cargo clearance, how do you prove that you have paid when you cannot present any receipt as evidence?

“It is really a problem, and if agents cannot make Customs duty payment and other shipping charges, cargoes won’t leave the ports. I heard that the port is already 95 per cent full. If care is not taken, the whole port will become filled up with containers because many of us cannot pay Customs duty because the banks are closed.

“For me, I have documents of five containers that I am supposed to begin work on, but because I cannot pay Customs duty and other shipping charges online due to the risk involved, these cargoes have been lying down there in the port unattended to.

“However, I was shocked that none of the banks in Apapa opened for business when I got there. If the banks are not open, payment of Customs duty and shipping charges will be difficult, if not impossible. I cannot pay online because I won’t get a receipt for payment.”

While agents are busy lamenting their inability to move from their respective homes to the ports with their TDO’s and also pay Customs duty at the banks, haulage operators who lift over 70 per cent of cargoes out of the ports have bemoaned the ‘no movement’ restriction placed on Lagos State, stating that since the lockdown, trucks have not been able to move beyond the seaports and Apapa area.

Speaking to the Nigerian Tribune, vice chairman, Dry Cargo Section of the Nigerian Association of Road Transport Owners (NARTO), Alhaji Inuwa Abdullahi, stated that since the lockdown, truckers have not been able to move beyond the seaports.


“Our trucks are there in the garages, on the roads and along the ports’ access roads. Since the lockdown, we have not been able to move beyond the port area. There are checkpoints all over the roads in Lagos, and the fear of facing multiple extortions has made many of our members remain glued to the spot that they were the day the lockdown began.

“There are jobs in the ports because some agents who already have TDO before the lockdown began are looking for trucks to lift their consignments. However, after lifting a container, you cannot move further because of the lockdown,” he said.

Also speaking on the lockdown, the chairman, Association of Maritime Truck Owners (AMATO), Chief Remi Ogungbemi, lauded the NSC for providing free buses at strategic places to convey people to and from the ports, but stated that the buses are not enough.

“The challenge we truckers have now is moving towards the ports to lift cargoes. Many of the truck drivers and motor boys are being stopped at various checkpoints by security operatives who are enforcing the lockdown in Lagos. Most of the truck drivers and motor boys, once they cannot present valid means of identification or convince the security operatives at the checkpoints, are stopped and turned back.

“However, we learnt that the Nigerian Ports Authority (NPA) is making efforts to allow truckers fall under essential service providers so that we can have unhindered access into the ports. If we cannot go into the ports to lift cargoes, then the ports will become overwhelmed with cargoes,” he stated.

Much ado about COVID-19 palliatives