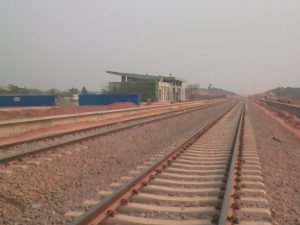 Skeletal train services may commence on Lagos-Ibadan rail route by mid of September 2020 as tracks have been laid from Ebute Metta to Ibadan.

Disclosing this at the weekend, the Managing Director of Nigerian Railway Corporation (NRC), Engr. Fidet Okhiria said the train services will run 16 trips in a day.

He said though stations are still under construction, the train service will start operations.

According to him, “We will start by the middle of September from Yaba to Ibadan while the other construction finishing will continue.

“We already have 24 coaches and a set of DMUs (Diesel Multiple Units) made of eight coaches. With this, we intend to have 16 trips a day”.

Okhiria said the corporation will not wait for all the stations to be ready before commencing operations in order to enable Nigerians to start enjoying the dividends of the tracks and coaches that have arrived.

In December 2019, the Corporation had a test run the train services, recording high patronage.

NRC target was to commence full operations of the service before May 2020 before the outbreak of COVID19 which slowed down work on the construction of the stations.

The 156km Lagos-Ibadan rail line has 11 major and minor stations, all the stations are at different stages of construction with many nearing completion.

Plan To Destabilise Nigeria Is Real — SSS
THE State Security Service (SSS), on Friday, insisted that there were plans by some unnamed notable personalities in the country to subvert the nation. In a statement made available to newsmen in Abuja by its spokesperson, Dr Peter Afunanaya, the service pointed out that part of the orchestrations of the plotters was to engage in divisive acts as well as use inciting statements to pit one group against another in the country…Lagos-Ibadan rail line Lagos-Ibadan rail line

More Heads To Roll In UNILAG •Babalakin, Ogundipe Trade Words, Resumption In Jeopardy
MORE top officials of the embattled University of Lagos (UNILAG) are to be axed for alleged financial recklessness and mismanagement which consumed the institution’s Vice-Chancellor, Professor Oluwatoyin Ogundipe on Wednesday, the Governing Council, disclosed on Friday…Lagos-Ibadan rail line

The Independent National Electoral Commission (INEC) has urged stakeholders in the electoral process to join the commission in deepening the use of technology and instituting a regime of transparency in electoral process. INEC Chairman, Prof. Mahmood Yakubu, represented by Mr Festus Okoye, INEC National Commissioner and Chairman, Information and Voter Education Committee, made the call at a virtual…Lagos-Ibadan rail line