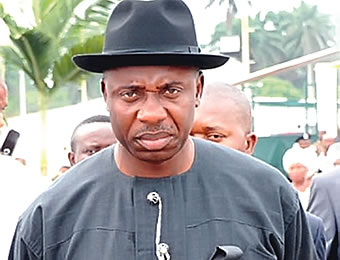 The Minister of Transportation, Hon. Rotimi Amaechi has said that the Chinese Civil Engineering Construction Company (CCECC) is working below par as regards the pace of work at the ongoing construction of Lagos-Ibadan standard gauge railway.

The minister stated this on Monday during the inspection of the Lagos-Ibadan railway project, alongside with the Minister of State for Transport, Gbemisola Sakari.

Amaechi noted that the government needs to charge the company to get them back to the same speed they were previously.

He added that the cabinet and the president have paid them on Friday and has approved the payment of additional works, so they will not have any excuse.

ALSO READ: How FG policy on diversification can work ―Oyetola

Speaking on the factory for locomotives production which is to be situated at Kajola in Ogun state, he said that a date has been given by the Vice President Yemi Osinbajo but promised to notify everybody when the flag off will commence.

On the demolition of properties owned by FlourMills Nigeria, Limited, the Minister of Transportation stated that “The FlourMills properties is not a problem. We will talk to them, and pay them compensation before demolishing it; but there are fuel pipes that once we demolish, there may be fuel scarcity in the country, so we can’t afford to shut it down.

“Iju to Apapa axis in Lagos, we have the problem of urbanization, and also to deal with issues of water pipes, fuel pipes, Bridges, but most important is the fuel pipes, which once demolished, may lead to fuel scarcity in the country. So we can’t afford to bring them down now.”

In her own presentation, the Honourable Minister of State for Transportation, Gbemisola Saraki expressed her excitement to see the work that has been done.

In her words, “I am actually happy that some work has been done. Yes, the minister complained about the pace of the work. For me to see that this place before used to be a forest and is now movable, there’s a train track on it. We came on it. I think that is just amazing for us in four years.”

I have never collected pension from Rivers govt – Rotimi Amaechi

Buhari applauds Amaechi, CCECC as he flags off University of Transportation in Daura