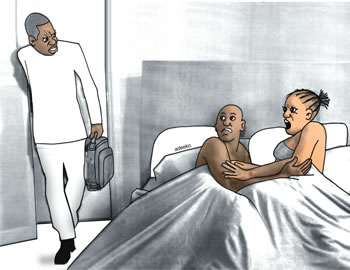 Barely after four years of nuptial bliss, a 56-year-old businessman, Mr Andrew Ekpenaslim, has approached an Igando Customary Court in a Lagos suburb to dissolve his marriage, citing wife’s infidelity.

He accused his wife, Saraphina, who had a daughter for him of adultery.

“My wife is promiscuous, she is having an affair with our pastor and I got to know when her phone rang and she left our room to receive the call outside.

“I followed her without knowing and l eavesdropped; she ended the call with`I love you’. When she returned, I copied the number and saved it. It was our pastor’s name that appeared on my phone.

“Apart from dating our pastor, she also has other numerous lovers. She is fond of receiving calls at odd hours.

“She has made me a laughing stock in our neighbourhood as her lovers always mock me,’’ he said, urging the court to terminate the marriage.

“I am no longer interested in the marriage as my life is no longer safe.

“Please dissolve our union because she can Infect me with sexually-transmitted diseases such as HIV because of her adulterous acts,” he pleaded.

However, Saraphina, 42, a businesswoman, denied all the allegations, saying she has been faithful.

“I have been faithful to my husband since the inception of our marriage and I am not dating our pastor. He is just a spiritual father to me,’’ she said.

She told the court that her husband was a wife beater.

“My husband always beats me at thecslightest provocation; he had injured my eyes on three occasions.

“He once beat and pushed me down from the staircase and l lost my two-month-old pregnancy.”

She, however, did not object to her husband’s plea to the dissolution of the marriage, saying “I am fed up.”

The court’s President, Mr Adegboyega Omilola, ordered the estranged couple to bring three of their relatives for a possible reconciliation.

He adjourned the case to July 19 for further hearing.